Crowds will be back as top-quality racehorses run at York’s four-day Ebor Festival, which starts on Wednesday.

A total of more than 80,000 spectators are expected on the Knavesmire for the meeting, which was behind closed doors last year due to Covid-19 restrictons.

Wednesday starts the festival with a bang as Group One winners Love, Mishriff and Alcohol Free are among runners in the Juddmonte International.

The Juddmonte (15:35 BST) is one of three Group One races, alongside Thursday’s Yorkshire Oaks and the Nunthorpe Stakes on Friday.

Saturday’s Ebor is the richest handicap race staged on the flat in Europe.

Love, winner of last season’s 1,000 Guineas and Oaks, is the sole representative of trainer Aidan O’Brien in Wednesday’s big race after hot favourite St Mark’s Basilica was withdrawn through injury.

Coronation Stakes and Sussex Stakes winner Alcohol Free steps up in trip from a mile to one and a quarter miles, while Irish 2,000 Guineas winner Mac Swiney bids to bounce back after finishing out of the places in both the English and Irish Derby.

The going is expected to be good for the meeting, where one of the other highlights will be the Lonsdale Cup on Friday featuring Stradivarius and Trueshan.

Stradivarius is one of several exciting mounts for jockey Frankie Dettori, 50, who will be aboard American sprinter Golden Pal in the Nunthorpe.

“I was very pleased, he moved like a gazelle,” said Newmarket-based Dettori who flew by helicopter to York on Tuesday to partner Wesley Ward’s horse in a training exercise. 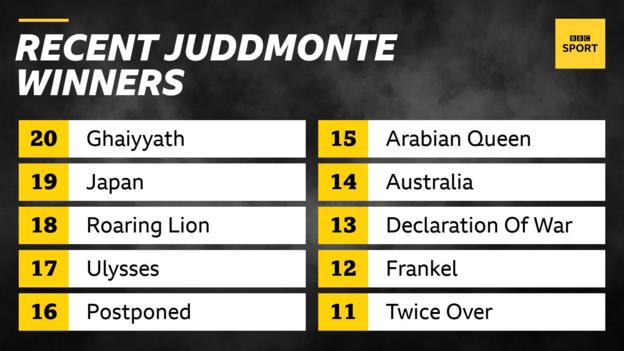