Tottenham are ready to make their move for Villarreal’s 24-year-old Spain defender Pau Torres, who has been valued at £55m and attracted interest from Manchester City, Liverpool and Manchester United. (Times – subscription required)

Spurs are also in talks with Fiorentina over a deal for 23-year-old Serbia defender Nikola Milenkovic, whose proposed move to West Ham broke down. (Sky Sports)

Real Madrid are prepared to sell Norway midfielder Martin Odegaard this summer, with Arsenal ready to make a move for the 22-year-old who had a successful spell on loan with the Gunners last season. (Goal)

Odegaard will not be part of Real Madrid’s opening La Liga fixture, but could cost in the region of £35-40m. (Sky Sports)

City could submit a fresh bid for Kane following this weekend’s meeting with Spurs. (MEN)

Southampton manager Ralph Hasenhuttl does not expect England midfielder James Ward-Prowse, 26, to leave the club. Saints have turned down a bid of £25m from Aston Villa. (Daily Echo)

Inter Milan’s Argentina striker Lautaro Martinez, 23, has decided he wants to remain at the club amid interest from Tottenham and Arsenal. (Mirror)

Lyon are up against Italian clubs AC Milan and Napoli in their pursuit of Chelsea’s 26-year-old France midfielder Tiemoue Bakayoko. (Calciomercato – in Italian)

Barcelona manager Ronald Koeman has had a request to sign two players turned down by club bosses as he tries to make up for the loss of Argentine Lionel Messi, 34, and the injury to compatriot and fellow forward Sergio Aguero, 33. (Sport)

Barcelona are willing to pay half of Brazil forward Philippe Coutinho’s salary in an attempt to secure a loan move to Lazio for the 29-year-old. (Gazzetta dello Sport) 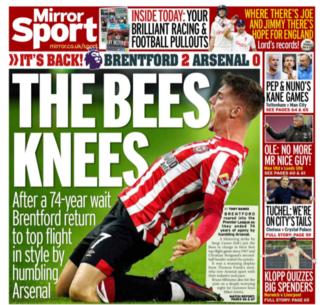