Jordan Henderson’s future at Liverpool is uncertain, with contract talks with the England midfielder, 31, failing to progress over the close season. (The Athletic – subscription required)

Chelsea know West Ham United and England midfielder Declan Rice, 22, is keen to join them and they will approach the Hammers to find out what it would take for a deal to be done. (Express)

Manchester City are interested in Sporting Lisbon and Portugal left-back Nuno Mendes, 19, but are unwilling to meet the £50m asking price. (Fabrizio Romano)

Atletico Madrid are adamant England full-back Kieran Trippier, 30, is not for sale amid interest from Manchester United – but the Spanish club would replace him with Wolves and Portugal right-back Nelson Semedo, 27, or Napoli and Italy right-back Giovanni di Lorenzo, 27, if he does leave. (AS)

Tottenham Hotspur are in advanced talks over a deal for Atalanta’s Argentina centre-back Cristian Romero, 23. (Football.London)

Arsenal remain outsiders in their pursuit of Italy midfielder Manuel Locatelli, despite their willingness to match Sassuolo’s £34m demands – with the 23-year-old set to choose Juventus due to their Champions League status. (Mirror)

Real Madrid and France centre-back Raphael Varane, 28, is open to a move to the Premier League and Manchester United are confident personal terms will not be a problem. (Guardian)

United are “inching closer” towards finalising a deal for Varane. (MEN)

United are willing to be patient in their pursuit of Rennes’ French midfielder Eduardo Camavinga, 18, as they look to drive down the fee. (The Athletic – subscription required)

United’s France midfielder Paul Pogba, 28, Juventus and Portugal forward Cristiano Ronaldo, 36, and Paris St-Germain’s France forward Kylian Mbappe, 22, are among the players who could move on free transfers next summer as a result of the financial impact on clubs caused by the coronavirus pandemic. (ESPN)

Southampton and England striker Danny Ings, 28, has his mind set on a move to Manchester City or Manchester United, but the south coast club are yet to receive an enquiry for him. (Talksport)

Everton are interested in Burnley winger Dwight McNeil, 21, in a deal worth £25m, but face competition from Aston Villa. (Liverpool Echo)

Newcastle United and Brentford are looking at Midtjylland‘s Jens Cajuste, 21, after Rennes’ pursuit of the Sweden midfielder came to a standstill. (RMC Sport – in French)

Barcelona have been offered the opportunity to sign Manchester United and Netherlands midfielder Donny van de Beek, 24, with the Spanish club offering France defender Samuel Umtiti, 27, as part of a swap deal. (Sport via Express)

Chelsea youngster Lewis Bates is attracting interest from Liverpool, West Ham, Leeds and Southampton, with the England Under-19 midfielder having just one year left on his contract. (Mail)

Fulham are the most likely to sign Liverpool and Wales winger Harry Wilson, with the 24-year-old accepting he needs to move on a permanent basis for his career. (Goal)

Bournemouth are favourites to sign Scott Dann, 34, on a free transfer after the defender left Crystal Palace. (Football Insider) 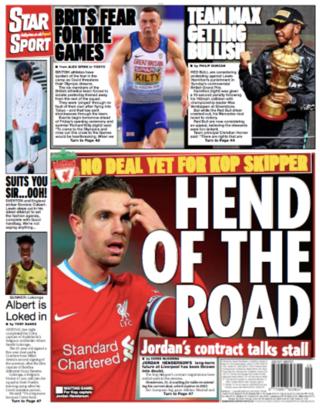 Daily Star back page – ‘Hend of the road’