Two Olympic gold medals. Not bad for someone once terrified of water in case a shark came up the plughole.

It was inevitable, really. Whispered before 03:13 BST on Monday but shouted thereafter, the 100m breaststroke title was only ever going to be Peaty’s.

He now owns the 16 quickest times – this race the fifth fastest – over the distance in history, and is the only swimmer ever to dip under 57 seconds with his 2019 world record.

Over the two lengths, he is unbeaten since 2014, a astounding run encompassing three world, four European and two Commonwealth titles – and now double Olympic gold.

“It’s a big relief, I guess. I put it simply: if you were looking for a promotion and you’d been working your arse off for five years to get that promotion and you’ve got to prove yourself within 57 seconds, it’s almost like that,” he said. “Under that pressure, a lot of people could fold.

“I’ve shown time and time again I can perform when it matters and get faster through the rounds. That’s what I do.”

It is what he does now – but Peaty hasn’t always been such a beast in the water.

When he was just 14, his front crawl was so off the mark that his coach, Mel Marshall, sent him to the slow lane.

His breaststroke, however, was a different story. “Like a JCB eating up the water,” she told the Telegraph.

That JCB digger was in top gear on Monday. The final’s morning berth meant his world record was unlikely to be threatened, his 57.37 time half a second slower than his best.

But it was still six tenths ahead of the rest of the field, with Dutch silver medallist Arno Kamminga – the only man other than Peaty ever to go under 58 seconds – still some way off challenging him for gold.

“I have so much respect for him,” Kamminga said. “He’s been pushing breaststroke for years now and he really set a new standard.

“If you really watch his stroke he’s so perfect in the small details, and that’s really pushing me in practice as well as competition to strive for perfection.”

Double Olympic gold medallist Rebecca Adlington said: “He is just phenomenal. We aren’t going to see many Adam Peatys in my lifetime.”

As he climbed on to the lane rope, as he did in Rio five years ago, the weight of expectation visibly lifted off his shoulders.

He let out a roar the lion on his arm would be proud of and his post-race interview was expletive-laden, but after placing the medal around his own neck – necessary in these times – he let out the biggest puff of breath.

The build-up to these Games had not been the easiest. The year’s delay amid the Covid-19 pandemic led to him installing a flume pool in his garden because facilities were shut. But make no mistake, every moment had been worth it.

“These past 18 months, every single day has almost been in the dark. Covid has taken a lot of fun out of things,” said the 26-year-old.

“If you put it into a percentage, 99.5% or 99.9% you spend in the dark searching for a bit of light. But 0.1% was that performance there. That’s why I put that amount of investment into what I do.” 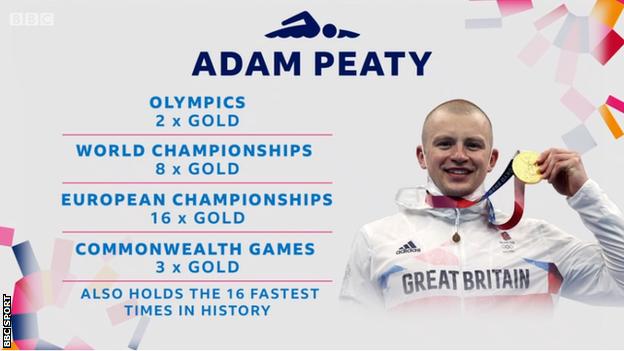 That investment hasn’t been without sacrifice. Peaty became a father in September when his partner, Eiri Munro, gave birth to their son, George.

It provided him with a new perspective on life and a focus away from the pool, but even more motivation to achieve.

“Being a father, all that emotional energy – I just can’t think straight of how much I’ve done it for them,” said Peaty.

Back home in the early hours on Monday, his little boy was watching his daddy do what he does best.

Any routine his parents had him in was thrown out of the window as George sat with his mum to watch, “very confused as to what was going on” but excited all the same.

“It was amazing. It’s going to be something we will remember for the rest of our lives,” Munro told the BBC’s Olympic Breakfast. “It means everything.”

Back in Uttoxeter, where Peaty was born and raised, his parents, Mark and Caroline, were also watching (on an alternative channel, but we’ll let that slide…).

His mum had set her alarm for 02:30, waking “feeling sick and nervous”. While the Peaty household is usually a noisy one, this time there was silence.

“Both of us knew it was going to be close and both of us were really quiet,” she said. “I was pushing myself back into the sofa because I was petrified.”

Peaty will come home with one medal – maybe more from the relay events – but his mum is glad one thing won’t be returning: the moustache he shaved off after the heats.

Munro loved it. But Peaty’s mum “wasn’t a fan at all”.

But when the end arrives, whenever that may be, he won’t finish his career with a medal collection so bumper as those owned by Michael Phelps, or athletics’ Usain Bolt.

It doesn’t matter, though, because that has never been an aim. What he craves is immortality; to retire with a swim so good it will never be beaten.

Bet against him if you dare.