Dottin has helped to illuminate the opening weeks of The Hundred with London Spirit, but she could just have easily been in Tokyo this month chasing Olympic gold.

Throughout her childhood, Dottin was an athlete first and cricketer, well, fourth.

“Athletics brought me a long way in terms of sports before I actually turned to cricket,” she said.

“I’ve always had some thoughts of going back because my dream was always to make one Olympics.”

Specialising in the javelin, Dottin also excelled in the shot put and the discus and competed in an event called the CARIFTA Games, a junior competition consisting of two age-groups (U18s and U20s) from all the nations within the Caribbean Free Trade Association.

“Experiencing CARIFTA and actually performing in them was nailbiting for me, I was really, really nervous,” Dottin said. “The first time I went to CARIFTA I think was 12. So it was nailbiting, it was nerves, but it was always an honour to represent your country at that sort of level of athletics.”

And at the event in 2007, Dottin would make history.

Not only did she win gold in her preferred event of javelin, but also in the discus and the shot put. Three from three. And for what it’s worth, just one year later, she would also make her debut in international cricket.

But how did the nerves of competing in each compare?

“To be honest the nerves hit different to be up next at the javelin,” Dottin laughs.

“If you’re not focused at the task at hand, you’ll just freeze. There are many times with the javelin I’ve run up and stopped before I can even get in a throw… the nerves, yeah, they hit different.”

The beginning of Dottin’s cricketing career would signal the end of her one in athletics.

Athletics was and is where her passion lies and it was only after a feeling of disillusionment at the lack of support from the Barbadian governing body that she felt forced to turn her back on the sport.

She recalls after her record-breaking 2007 performance being bemused at the fact a team-mate of hers who won the octathlon at the World Youth Championships received national plaudits, whereas her record-breaking three gold medals at the CARIFTA earned her, “a little glass trophy”, more suited to a school sports day than an international competition.

However, where athletics had failed her, cricket succeeded.

Encouraged by former West Indies player Pamela Lavine to pursue cricket, a pathway to success and a career was laid out in front of her. Dottin would be an international athlete, just not in the sport she’d envisioned.

For the next 10 years, Dottin built herself a reputation as one of the most destructive cricketers in the world. 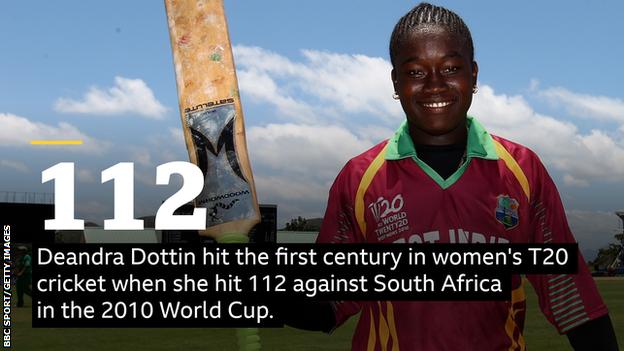 However, in the back of her mind remained her dream of being an Olympian.

Finally in 2019, Dottin decided it was now or never.

Tokyo 2020 was the aim and training plans were in place when disaster struck. A serious injury to her right shoulder required reconstructive surgery and a year out of all sport.

Dottin would later give interviews detailing the lows she felt over those 12 months and how difficult she had found that time in her life. However, all the quotes were taken in the context of being away from cricket, with none alluding to the true pain behind the injury, which was the end of a childhood dream.

Which makes sense. Because Dottin hadn’t told anyone. Notable people who weren’t aware of her plan included the West Indies Cricket Board.

“They’d have been in for a shock,” Dottin says with a smile.

A cricketer by chance, but perhaps an Olympian by destiny, Dottin still hasn’t completely given up on the idea.

After a year of rehab, her shoulder is feeling stronger than ever, but she’s realistic that at the age of 30 with the next Olympics still three years away, time is not on her side.

Plenty of luck may be required and plenty of stars may have to align, but for the meantime there’s still hope that Deandra Dottin’s CV will one day read 2016 world champion and 2024 Olympian.

Just as she always dreamt it.

The ECB’s Hundred Rising is providing eight aspiring, young journalists the opportunity to tell the story of The Hundred men’s and women’s competitions through their own eyes.