Birmingham Phoenix surged to the top of the men’s Hundred table after a comfortable win over rivals Trent Rockets at Trent Bridge.

Liam Livingstone smashed 50 off 30 balls and Miles Hammond also scored a quickfire 38 off 20 as Phoenix posted 166-6.

Debutant Dillon Pennington, who ended with 2-11 from 15 deliveries, took two wickets as Rockets fell to 28-3 in reply.

Steven Mullaney, who earlier took a great catch on the boundary to dismiss Livingstone, hit 49 off 33 deliveries to give his side a chance before he fell to Pat Brown, the seamer the pick of the Phoenix bowlers with 3-27. 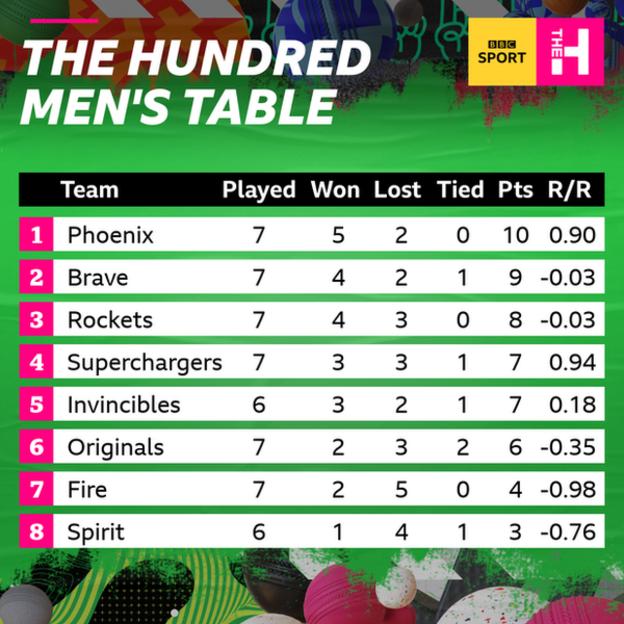 Livingstone lights up the Midlands derby

On Thursday we were treated to The Hundred’s first team score of 200.

And for a moment it looked like we could be heading for that landmark again with Phoenix on 90-1 after 55 balls.

Rockets may have pulled their rivals back, but Liam Livingstone’s match-winning knock proved to be the difference.

Some players seem to thrive off pressure, and Livingstone is SOME player.

Having been handed the captaincy in the absence of Moeen Ali, who is playing for England in the second Test against India, Livingstone did not buckle under the added responsibility.

Whether it was a top edge or a powerful punch, Livingstone still managed to find the boundary. His knock included three sixes and four fours and he also becomes the second highest run-scorer in the men’s Hundred.

But, as this run map shows, he clearly prefers one side to the other…

Mullaney did all he could to make Phoenix work hard for the win, both in the field and with the bat.

With his team in big trouble at 57-4 when Samit Patel was bowled by spinner Imran Tahir (who, obviously, treated us to his trademark wild run around the pitch celebration), Mullaney took the reigns, smashing three sixes and two fours.

Despite the loss, Rockets will be encouraged by the grit and character shown by Mullaney.

A debut to remember for Pennington

The Hundred is the perfect platform for young players to make their name, and one cricketer who announced himself on the big stage was 22-year-old Dillon Pennington.

The Shropshire-born seamer’s first victim was one of the most explosive white-ball cricketers in domestic cricket, Alex Hales, and his second was the world’s top-ranked Twenty20 batsman, England’s Dawid Malan.

Pennington bowled the perfect line and length ball which clipped the top of Hale’s off stump.

Two balls later, he had Malan edging behind for a duck.

Not a bad introduction to the competition…