England captain Joe Root can get even better despite his prolific form, says team-mate Jonny Bairstow.

Root made a magnificent 180 not out on day three of the second Test against India at Lord’s, his second hundred in the space of eight days.

It was his fifth Test century of 2021. Only Denis Compton and Michael Vaughan have made six in a year for England.

“He is only 30 years old. He is still coming to his peak,” Bairstow told BBC Sport.

“It is really exciting and to see how far he could potentially go is great for English cricket.”

Root’s sublime innings helped England to 391 all out – a lead of 27 – leaving the game tantalisingly poised with two days remaining.

He was only denied the opportunity to become the first England player to make three double hundreds in a calendar year because he ran out of partners.

Asked what Root means to the England team, Bairstow said: “A heck of a lot, like he does to English cricket.”

How well did Root bat?

“He looked fluent from the start,” former England batsman Mark Ramprakash said on BBC Test Match Special. “He is such a great player. He has just carried on from Trent Bridge.

“He is in an extraordinary run of form. He seems to have mentally added an element to his game, where he has become really ruthless.”

BBC cricket correspondent Jonathan Agnew described Root’s 180 as “wonderful, well-controlled innings”, adding: “He got a slap on the back from some of the Indians.”

TMS commentator Simon Mann said: “It was a masterclass. It has been another brilliant exhibition on a Saturday afternoon.”

Former England captain Michael Vaughan said: “It’s all about Joe Root once again. What a year he is having.”

Root has collected several landmarks in this game alone… 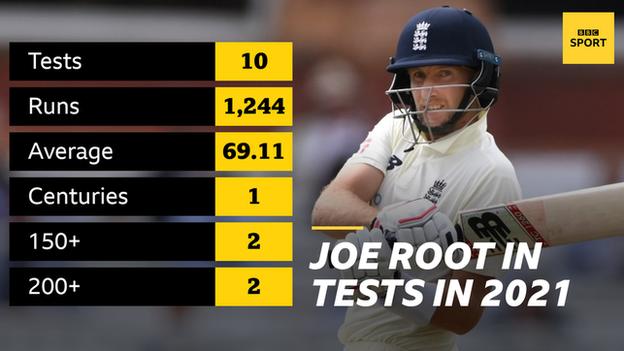 Root’s sublime innings was applauded all around the globe.

If only Root received more support from his team-mates, maybe England would not be searching for a first win in seven Tests.

Which begs the question: how can the rest of the England batsmen help their captain out?

Vaughan has a novel idea: “The rest of England’s players should put their bats in Joe Root’s bag and see if some of the magic on his bat rubs off on theirs.

“We used to do it with Darren Lehmann at Yorkshire. He averaged 80-odd every year and would be walking around with a bag full of our bats.”

Whatever happens in the rest of this game, Bairstow has not ruled out Root – his Yorkshire team-mate – collecting a third successive century in the third Test at Headingley, starting on 25 August.

“I’m very fortunate to have spent a decent amount of time with him at the crease today and over the last 15 years,” said Bairstow, who made 57 in a stand of 119.

“They are special times. If you are able to enjoy it with one of your best pals, it makes it so much better.

“It’s two in two. We go to Headingley next and he might make it three in three.”

On the evidence of the past week, few would rule it out.