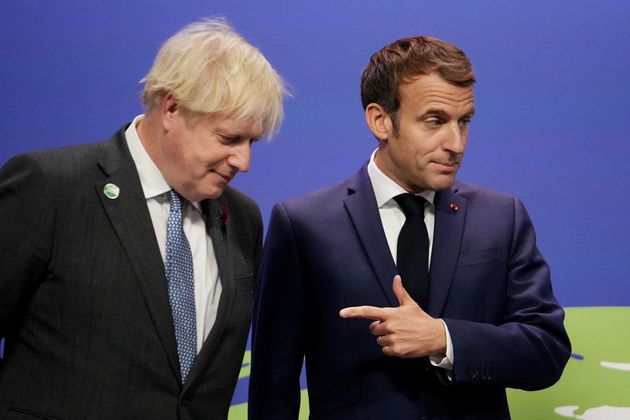 The UK had also threatened France with legal action over the dispute.

The UK welcomes that France has “stepped back” from threats in a row over fishing rights, environment secretary George Eustice has said.

French president Emmanuel Macron had warned Paris could block British boats from landing their catches in French ports and tighten customs checks from midnight unless the UK granted more licences to French boats.

In turn, the UK had also threatened France with legal action.

However, in a de-escalation of the crisis, both sides have agreed to continue talks over the issue, with a meeting to be held between Brexit minister Lord Frost and his French counterpart on Thursday.

Eustice told Sky News: “We welcome the fact France has stepped back from the threats it was making last Wednesday.

“We’ve always said we want to de-escalate this and always said we have an ever-open door to discuss any further evidence France or the EU might have on any additional vessels they’d like to have licensed.

“France has clearly taken a decision not to implement some of the decisions they threatened last Wednesday, we very much welcome that but I think there’s going to be a very important meeting on Thursday between Lord frost and his opposite number, not just on fisheries but a wider range of issues as well.”

The simmering row between the two countries over fishing licences culminated in the French seizing a British trawler and fining another during checks off of Le Havre on Thursday.

France went on to threaten to block British boats from ports and tighten border checks if the UK does not agree to hand out more fishing licences by today.

France claims the UK only granted 12 licences out of 47 bids for smaller vessels to fish in the UK six to 12 nautical mile zone. That figure is now understood to have risen to 18.

But the UK has said it had granted licences to 98% of EU vessels which have requested permission to operate in British waters, and reiterated that only boats which can demonstrate they have fished in UK waters for one day in each of the years between 2012 and 2016 qualified for a licence.

Eustice told the BBC’s Radio 4 Today programme that the UK had been implementing the Brexit trade deal “in good faith”.

“We’ve always been clear with France and the [EU] commission that if there are remaining vessels that haven’t yet been issued a licence but can bring together the evidence to show they’ve got a track record of fishing in Jersey’s waters, then of course we will give them a licence as they’re entitled to.

“But we very much welcome the fact that France has stepped back from the threats that they made last Wednesday.

“We made clear last week that we thought the threats France made were disproportionate, we felt they were very disappointing because we’ve been implementing the agreement and we just very much welcome the fact that Francis stepped back from that course of action.”

Asked about the fate of the seized UK vessel, Eustice told Sky News it had now been released.

“I understand that vessel has now been released and I think there’s going to need to be some further discussions, clearly there was an administrative error at some point,” he said.

“We haven’t quite got to the bottom of that but that vessel I understand has been released.”

On Monday night, Macron was reported to have told journalists at the Cop26 summit in Glasgow that discussions with Boris Johnson had resumed over the issue.

“We’ll see where we are tomorrow at the end of the day, to see if things have really changed,” he is reported to have said.

“My wish is that we can find a way out on all these issues.”