Manchester United midfielder Paul Pogba is a target for Paris St-Germain this summer and the Ligue 1 side are seeking to sell players to raise the £50m they believe will secure a deal. (Mirror)

Real Madrid’s France centre-back Raphael Varane, 28, is keen for a move to Manchester United to be completed within the next few days. (AS – in Spanish)

Barcelona are desperately trying to sell players in order to fund a new contract for Argentina forward Lionel Messi, 34, before the start of the season. (Guardian)

Arsenal are willing to offer Leicester City a number of players – including 21-year-old English winger Reiss Nelson – as part of a deal to sign England midfielder James Maddison, 24. (Daily Mail)

The Gunners are stepping up their pursuit of Barcelona’s Brazilian goalkeeper Neto, 31. (Mundo Deportivo, via The Sun)

Chelsea might make a bid of £135m for Borussia Dortmund and Norway striker Erling Braut Haaland, 20. (ESPN, via 90 min)

Tottenham are close to agreeing a deal with Sevilla for Spanish winger Bryan Gil which will see Argentine forward Erik Lamela move to the La Liga club. (Sky Sports)

Juventus have set a £35m asking price for Turkish 21-year-old defender Merih Demiral, who has been linked with a move to Everton. (Goal)

Bayer Leverkusen’s 25-year-old English winger Demarai Gray had a medical on Tuesday as he moves closer to signing for Everton. (Sky Sports)

However, Aston Villa are also keen on English keeper Bettinelli as competition for Emiliano Martinez and Jed Steer. (Daily Mail)

Manchester City might still have a decision to make over whether academy star Liam Delap should be loaned out this season, with Preston North End understood to be interested in the 18-year-old English striker. (Manchester Evening News) 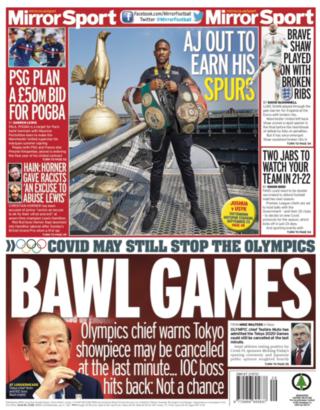