Liverpool have joined Manchester United in the battle to sign Leeds and England midfielder Kalvin Phillips, 25, in a £60m deal. (Star)

Liverpool is one of the clubs that has expressed an interest in signing England midfielder Jude Bellingham, 18, from Borussia Dortmund. (Sport1, via Sun)

Marc Overmars will leave Ajax to become Newcastle’s director of football in January or February. (De Telegraaf via Voetbal Primeur – in Dutch)

Manchester United will be forced to pay manager Ole Gunnar Solskjaer a £7.5m severance package if they sack him now. (Sun)

Newcastle had a scout watching Bayer Leverkusen’s attacking midfielder Florian Wirtz, 18, as the Germany international played against Cologne on Sunday. (Bild – in German)

Liverpool plan to use a signing-on fee to help Mohamed Salah, 29, become their highest earner but reports the Egypt forward is asking for £500,000 per week in a new contract are inaccurate. (Teamtalk)

Michael Edwards is planning to leave his role as Liverpool’s sporting director at the end of the season and the 41-year-old Englishman does not have a new job lined up. (Football Insider)

Barcelona have made an initial enquiry about Monaco’s Brazilian full-back Caio Henrique, 24. (AS – in Spanish) 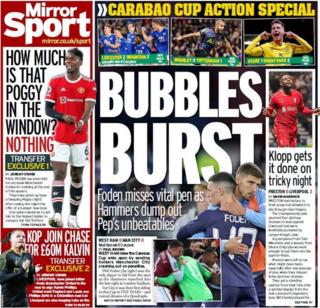 Back page of the Mirror

Aubrey O’Day accused of Photoshopping herself into Bali pics