Paris St-Germain will look to sell up to 10 first-team players to help balance the books following their signing of Argentina captain Lionel Messi, 34. Senegal midfielder Idrissa Gueye, 31, Spain midfielder Ander Herrera, 31, and 28-year-old Argentina striker Mauro Icardi are among those who could be moved on. (Sport – in Spanish)

Manchester United have no intention of selling Anthony Martial this summer after the 25-year-old France forward was linked with a move to Inter Milan. (Telegraph – subscription required)

Tottenham are still in talks to sign Lautaro Martinez, 23, despite reports suggesting Inter Milan are unwilling to sell both the Argentina striker and 28-year-old Belgium forward Romelu Lukaku, who is finalising a move to Chelsea. (Football Insider)

Liverpool and Lyon are a long way apart in their valuation of Xherdan Shaqiri, with the Reds wanting at least £12m for the 29-year-old Switzerland forward. (Liverpool Echo)

Everton are set to make a £3m bid for Antwerp’s Portuguese right-back Aurelio Buta, 24, who has also attracted interest from Celtic. (Sun)

Arsenal want to keep 25-year-old English defender Rob Holding at the club despite reported interest from Newcastle and Leicester. (Football.London)

Everton forward Richarlison, 24, could feature in Saturday’s season opener against Southampton despite not having a summer break after representing Brazil at the Copa America and Tokyo Olympics. (Liverpool Echo)

Chelsea are standing firm over their £25m valuation of 26-year-old France defender Kurt Zouma, who has been attracting interest from West Ham. (90 Min)

Sevilla director of football Monchi is waiting for Chelsea to call him so he can push through 22-year-old French defender Jules Kounde’s move to Stamford Bridge. (Express)

Arsenal are waiting for Martin Odegaard to decide on his Real Madrid future before pursuing a permanent deal for the 22-year-old Norwegian midfielder. (DefensaCentral, via Express) 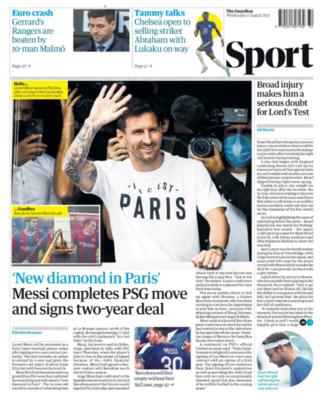