Real Madrid have made an opening offer of £137m for Paris St-Germain striker Kylian Mbappe, but the French club are likely to reject the bid for the 22-year-old, who has one year left on his contract. (Mail)

Juventus and Portugal forward Cristiano Ronaldo, 36, will push for a move to Premier League champions Manchester City during the final week of the transfer window, with the former Manchester United favourite not keen on seeing out the final year of his contract with the Italians. (L’Equipe – in French)

Ronaldo has discussed the move with City‘s Portuguese contingent of Bernardo Silva, Ruben Dias, 24, and full-back Joao Cancelo, 27. Attacking midfielder Silva or City’s Spain defender Aymeric Laporte, both 27, may be included as part of a swap deal. City are willing to meet Ronaldo’s salary demands, but not prepared to pay a sizeable transfer fee. (L’Equipe – in French)

Manchester United are in “pole position” to sign Borussia Dortmund and Norway striker Erling Braut Haaland next summer. The 21-year-old has established himself as one of the transfer market’s hottest properties after scoring 62 goals in 63 games for the Bundesliga side. (Bild – in German)

Chelsea could face competition from Manchester United if they step up their efforts to sign Atletico Madrid and Spain midfielder Saul Niguez, 26, on loan. (Guardian)

Arsenal have held discussions with Atletico Madrid over signing England right-back Kieran Trippier, although the 30-year-old would prefer a move to Manchester United if he leaves the Spanish capital. The Gunners are not willing to meet Atleti’s £34m price-tag for the former Tottenham defender. (Eurosport)

West Ham are planning a bid for Montpellier striker Gaetan Laborde, 27, but the Ligue 1 side may demand at least £12.5m for the Frenchman. (Le 10 Sport – in French)

The Hammers are more hopeful of signing France centre-back Kurt Zouma from Chelsea after making progress in their attempts to bring in the 26-year-old. (Telegraph – subscription required)

West Ham are weighing up a move for CSKA Moscow and Croatia winger Nikola Vlasic, 23, as an alternative to Manchester United’s Jesse Lingard, with the England attacker, 28, likely to stay at Old Trafford. (Telegraph – subscription required)

The agents of Netherlands international Donny van de Beek have snubbed interest in the 24-year-old Manchester United midfielder, who is determined to earn a regular starting place. (Times – subscription required)

Liverpool and Wales right-back Neco Williams may end up staying at Anfield with interest in the 20-year-old having faded in recent weeks. (Liverpool Echo)

Burnley have had a £15m offer for Ivory Coast left-back Maxwel Cornet accepted by French club Lyon and it is now up to the 24-year-old if he wants to join the Turf Moor side. (Sky Sports)

Barcelona defender Sergi Roberto, 29, and 33-year-old midfielder Sergio Busquets, who are both Spain internationals, are close to agreeing pay cuts with the La Liga club. (Marca) 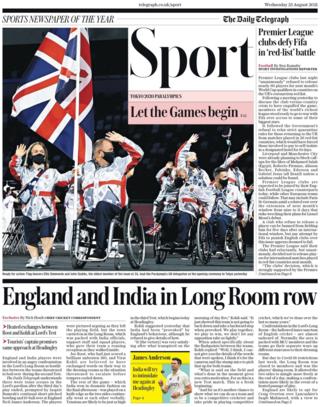 The front page of the Daily Telegraph sports section