London Spirit comprehensively beat Welsh Fire in the final group game of the women’s Hundred in Cardiff, but missed out on reaching the latter stages of the competition due to an inferior run-rate.

Having restricted Fire to a measly 95-9, Spirit needed to chase down the target in 41 balls to reach the eliminators and knock out Birmingham Phoenix.

Captain Heather Knight impressed with the bat – finishing unbeaten on 34 off 19 balls – but Spirit were 33 runs short of reaching the target within the timeframe,

Danielle Gibson also scored 34 not out from 19 balls, as Spirit went on to seal the win in 58 balls.

They end the competition in fourth place, while Fire – with only two victories from eight games – finish bottom.

Oval Invincibles and Phoenix will contest the eliminator on Friday, with the winner facing Southern Brave in Saturday’s final at Lord’s. 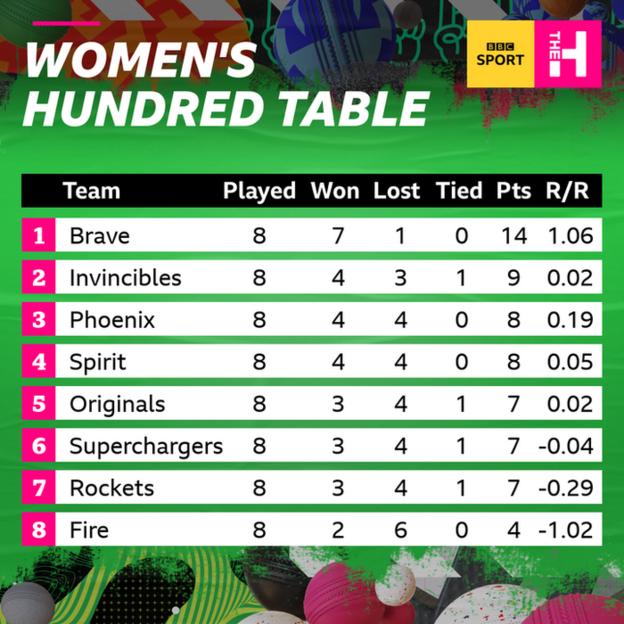 A missed opportunity for Spirit?

By putting Welsh Fire into bat, Spirit gave themselves the best chance of pulling off the highly improbable and securing a top-three finish.

“We will have to swing hard to get it, so welcome to ‘The Forty’ rather than The Hundred,” Knight, speaking at the toss, said with a wry smile.

Well the task in hand became a lot more doable at the conclusion of Fire’s innings, and it was a team effort with Knight, Deepti Sharma, Charlie Dean and Danielle GIbson all picking up two wickets each.

With Deandra Dottin – who holds the record of the quickest women’s international hundred (38 balls) – in their batting ranks, Spirit had a chance.

But, surprisingly, the big-hitting West Indies batter was not promoted to the top of the order. Looking back, was that a missed opportunity?

Openers Chloe Tryon (four off seven) and Tammy Beaumont (eight off seven) wasted balls and struggled to find boundaries from the outset and by the time Dottin came to the crease, with her side at 23-2 off 18 balls, Spirit’s chances had pretty much vanished.

Narrowly missing out of the latter stages of the inaugural Hundred will be disappointing, but Spirit will be encouraged by the fight shown at the backend of the competition.

For Welsh Fire, meanwhile, the only way is up.

The withdrawal of overseas stars Beth Mooney, Meg Lanning and Georgia Wareham before the tournament even started – after the Australia trio pulled out due to Covid-19 restrictions – undoubtedly had an impact.