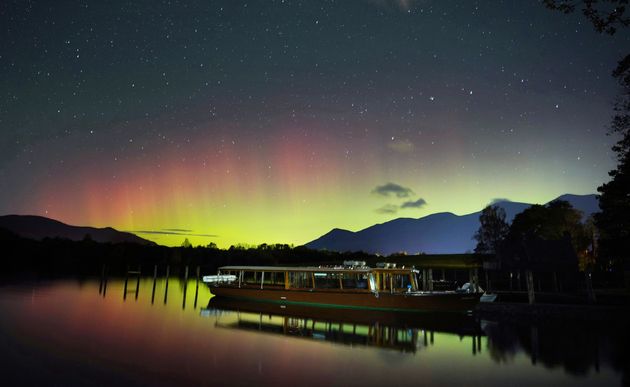 The Northern Lights seen over Derwentwater, near Keswick in the Lake District

The Northern Lights were visible across the UK on Wednesday night as a particularly strong solar flare left stargazers up and down the country in awe.

Nature’s most spectacular light show was visible to the naked eye even to people based down in Devon, south England, even though it is a phenomenon usually associated with the Arctic Circle.

5he lights aren’t typically accessible to central England or beyond most years, but a strong geomagnetic storm this week meant they stretched further than expected.

The storm left the sun on Tuesday and reached Earth on Wednesday, when the amazing light show started.

According to a Met Office space weather expert, Krista Hammond, the impressive lights could be making a comeback again on Thursday night.

She explained: “Further geomagnetic storms are possible tonight and into the early hours tomorrow morning, due to the ongoing effects of the coronal mass ejection.

“This means there is the potential for further sightings of the Northern Lights overnight, although there will be spells of patchy cloud over Scotland which could limit visibility in places.”

PA new agency photographer Owen Humphreys said: “This was one of the best I have seen in the UK for years.”

He said the colours made up for all the times “we go out in the middle of the night and don’t see anything”.

Northumberland’s Julie Winn also told PA: “It was better than I have seen for a long time, clearly visible to the naked eye, with subtle colours of pink and green.”

Here’s a list of all the British places wowed by Aurora Borealis on Wednesday night.

📍 Bridge to Nowhere, Dunbar.
Taken on Saturday, after hearing about a geomagnetic storm causing the Aurora Borealis to peak and become visible across the UK. Witnessing it so close to home is real bucket list stuff. Praying for more this PM 🤞 #aurora#stvnews#NorthernLightspic.twitter.com/vBXQUWepHj

Similar scenes unfolded on the other side of the Atlantic as well.