Jonny Evans has been included in the Northern Ireland squad for their World Cup qualifiers against Lithuania and Switzerland despite carrying an injury.

The Leicester City defender has not played since injuring his foot in May’s FA Cup final.

Experienced striker Kyle Lafferty has been left out while Liam Boyce was not considered due to family reasons.

Liverpool teenager Conor Bradley is included but there is no place for Doncaster loanee Ethan Galbraith.

Sunderland skipper Corry Evans is expected to be fit for the trip to Lithuania on 2 September despite missing the Black Cats’ last two matches through injury.

His brother Jonny, a stalwart at the heart of Northern Ireland’s defence where he has won 91 caps, was forced off during Leicester’s FA Cup final triumph and has not featured in either of the Foxes’ opening two Premier League fixtures.

Despite his inclusion, manager Ian Baraclough acknowledged that Evans’ selection does not guarantee his fitness, and that he remains a doubt for the three fixtures. 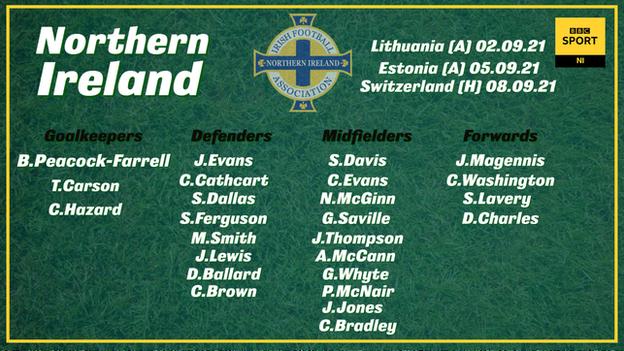 Hearts striker Boyce, who has enjoyed a strong start to the season on his side’s return to Scotland’s top flight, asked not to be included due to family reasons, with Baraclough also opting not to select 33-year-old Lafferty.

The former Burnley, Rangers and Kilmarnock striker joined Cypriot side Anorthosis Famagusta in the summer having left Killie following their relegation from the Scottish Premiership.

Northern Ireland face Lithuania in a must-win Group C qualifier on 2 September before hosting Switzerland on 8 September, with a friendly against Estonia on 5 September.

Baraclough’s side won only one point, in a home draw with Bulgaria, from their opening two qualifiers in March, leaving them third in the group with European champions Italy and Switzerland both undefeated above them.