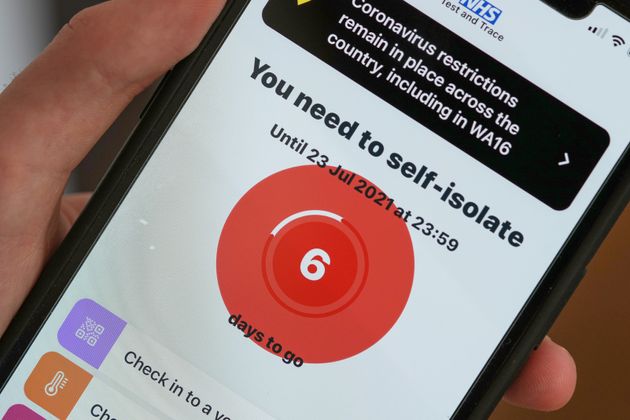 The NHS Covid app has been updated to reduce the number of people told to self-isolate in the “pingdemic”, the government has announced.

Health secretary Sajid Javid revealed that the smartphone app would from Monday have an upgrade to its “logic” system.

This will be updated based on public health advice to look back at contacts two days prior to a positive test.

The move is designed to restore confidence in the app following reports that many people were disabling it amid fears that they would be “pinged” and told to stay at home for 10 days.

The department for health and social care (DHSC) said the change will mean fewer contacts that took place when the positive case was unlikely to be at the peak of their infectiousness are advised to self-isolate, reducing the overall number of notifications sent by the app.

The department said the update would not impact the sensitivity of the app, or change the risk threshold, and will result in the same number of “high-risk contacts” being advised to self-isolate.

Javid said: “We want to reduce the disruption that self-isolation can cause for people and businesses, while ensuring we’re protecting those most at risk from this virus. This update to the app will help ensure that we are striking the right balance.

“It’s so important that people isolate when asked to do so in order to stop the spread of the virus and protect their communities.”

Thousands of people, including NHS staff, supermarket workers and others, have been forced into a 10-day home quarantine as the delta variant of the virus surged in recent weeks.

But from August 16, the requirement to self-isolate will be ditched for everyone who has been double jabbed with vaccines.

Wales is bringing forward that date to August 7 and Scotland will do it from August 9, largely because both are citing higher vaccination rates or a better handling of the pandemic than the UK government.

Shadow health minister Liz Kendall said: “The government has allowed infections to spiral out of control, leaving hundreds of thousands of people forced to self isolate every day, their response is not to drive down infections but instead quietly change the app that helps to keep us safe.

“This is yet another covid u-turn from ministers at a time when the public need clarity and certainty – not chaos and mixed messages. It’s shambolic and they must get a grip.”

Dr Jenny Harries, CEO of UK Health Security Agency, said: “The NHS COVID-19 App is a really practical example of how technology can be used to fight the biggest challenges we face in protecting and improving our health.

“The app is the simplest, easiest, and fastest way to find out whether you have been exposed to the virus, and it has saved thousands of lives over the course of this pandemic.”

The up pdate comes as new analysis shows the NHS Covid app continues to play a crucial role in breaking chains of transmission, preventing hospitalisations and saving lives.

New analysis from leading scientists shows that in the first 3 weeks of July, as cases were exponentially rising, the app averted up to 2,000 cases per day, and over 50,000 cases including chains of transmission assuming 60% compliance with instructions to self-isolate. This is estimated to have prevented 1,600 hospitalisations.

It also shows the app reduces the spread of COVID-19 by around 4.3% each week, and for every 200-250 tests entered and shared in the app one person is prevented from being hospitalised from the virus.

Usage remains high, with around 40% of the eligible population regularly using the app and around 50% of all reported tests being inputted.