England and India meet in a five-Test series starting at Trent Bridge on Wednesday.

Fourth in the world against second in the world. Joe Root versus Virat Kohli. England’s record-breaking seamers against India’s top-class spinners.

England have been almost unbeatable on home soil – their series defeat by New Zealand in June was their first since 2014 – but India dished out a 3-1 hiding when they hosted Root’s side earlier this year.

England will be without Ben Stokes, their lynchpin of an all-rounder, while India lost three players through injury last week and have had another ruled out of the first Test with concussion.

Who are the key figures? Where will the series be decided? And who will come out on top?

I would be more confident with Ben Stokes in the England side, so that changes it a lot. But with India being on tour and in the bubble situation for so long – they arrived in early June for the World Test Championship final – they will find it quite hard.

Given the moving ball, England will always fancy their chances against this India batting line-up. I think England will score just enough runs and win the series, with one of the Tests heavily affected by rain.

I don’t like saying this, but India have got the best chance that they will ever have of winning in the UK. There’s no Ben Stokes, no Jofra Archer and no Chris Woakes to start.

England’s Test team has been, if not in turmoil, then a little stop-start for the past year or so. And after the series defeat by New Zealand there are a lot of players under pressure.

India have got a powerhouse of a batting line-up, an incredible bowling line-up with all the variations.

I’m really looking forward to this series because there will be some great players on show.

I think there’s going to be a bit of an edge to this series – I can just feel it. England are going to struggle but I’m still going to back them to avoid defeat.

England’s batting looks brittle – they struggle to make big runs consistently – and there is a lack of experience at the top of the order, with the exception of captain Joe Root.

India have proved they are a top-class side, particularly with that amazing come-from-behind series win in Australia last winter. Can they also win in England? They are certainly highly motivated.

England are clearly concerned more with one-day cricket at the moment – their players have very little first-class cricket since that New Zealand series defeat in June – so my money is on India. 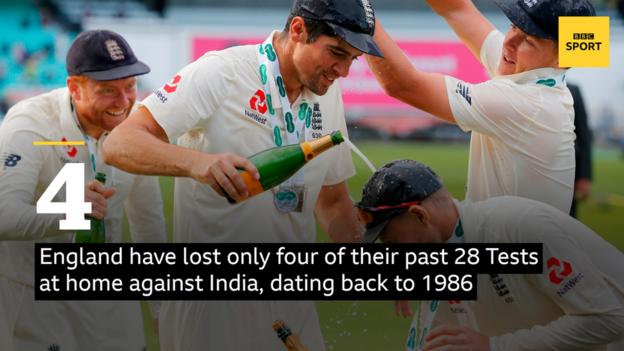 It is difficult to compare this series with England’s 3-1 series defeat in India last winter because they were playing on such spin-friendly pitches. It looks a more even contest in English conditions. India have not won in England for 14 years but they are a fine side and – led by the fiercely determined Virat Kohli – they have a very good chance of changing that.

Both teams have excellent seam attacks that will challenge all the batsmen. This series will come down to who can put the runs on the board. It is about the contributions from the big players, like Joe Root or Kohli, KL Rahul and Ajinkya Rahane. It should be a terrific series.

Prediction: Impossible to say because one Covid outbreak changes everything.

Without Ben Stokes, England are going to find it very difficult to balance their side. The Test series defeat by New Zealand showed that the top six without Stokes is still not proven and settled, although Jos Buttler should return.

Having witnessed first hand India beating Australia away – largely without Virat Kohli – I know they certainly won’t be fazed by playing in England, although if they come up against some very green tracks that could work in England’s favour. But I don’t feel like England are a confident match-winning team at the moment.

This feels like India’s big chance. True, their batting has been unconvincing in England in recent series and that gives England hope. But England’s top six looks vulnerable, especially without Ben Stokes. They are also missing Chris Woakes and Jofra Archer for at least the first two Tests.

England’s record against the big three – Australia, India and New Zealand – since beating India at home in 2018 is three wins from 13 Tests. India look strong enough to inflict some decisive blows.

India have got a really strong all-round seam-bowling attack, as they proved by winning in Australia last winter. They have great depth too – they managed to win that series with what amounted to a second team. They have an off-spinner in Ravichandran Ashwin and a left-arm spinner in Ravindra Jadeja, both of whom can score runs heavily.

India are one of the top two sides in the world, so I would have to say they are favourites against an England side in transition. England’s seamers will get the better of India in one match, but…