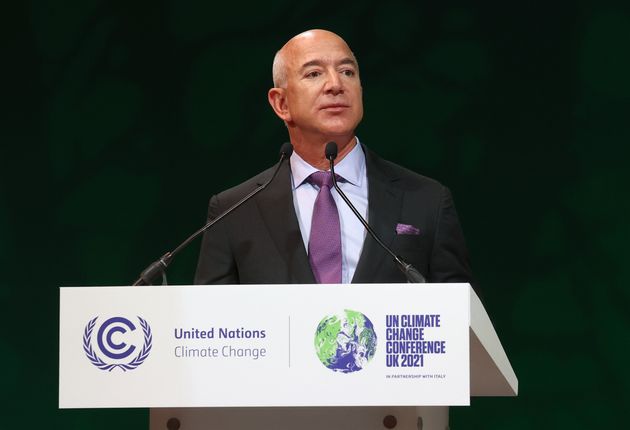 Bezos speaking at COP26 in Glasgow

The richest person in the world, Amazon founder Jeff Bezos, took to the stage to push for action on climate change on Tuesday – and people could not believe their eyes.

Bezos spoke at the UN’s climate summit COP26 about how his own adventures to space just earlier this year – enabled via his private company Blue Origin – made him realise how fragile the Earth and its atmosphere is.

“Looking back at Earth from up there, [in space] the atmosphere seemed so thin. The world so finite and so fragile,” the billionaire said.

“Now, in this critical year, in what we all know is the decision decade, we must all stand together to protect our world.”

He also announced a £2 billion pledge to restore nature as part of a £10 billion Bezos Earth fund.

But the irony of his declaration was not lost on viewers, who berated him for failing to implement green policies in his own companies.

The i’s Paul Waugh pointed out that just Bezos’ journey into space would have used up fossil fuels, culminating a significant portion of CO2 emissions.

And here he is. @JeffBezos tells #COP26 that ‘when I was in space’ earlier this year he realised just how thin the globe’s atmosphere was.
Think he forgot to mention just how many fossil fuels he spent getting into space. pic.twitter.com/PdGeXmW5FC

The Guardian’s political correspondent Peter Walker noted that the billionaire was “explaining the obvious” after his “massively polluting ego trip into space” which lasted approximately 10 minutes.

Bezos says how his space flight gave him a new awareness of the fragility of the earth. It does perhaps underline the occasional absurdity of events like Cop – a multi-billionaire explaining the obvious thanks to a massively polluting ego trip into space.

Walker also pointed out the irony that Bezos even had a platform at the event, noting: “He’s not the saviour, he’s the problem.”

The compère is gushing to Bezos after he speaks, thanking him for his “incredible work”. It’s all a bit jarring. This is someone who has become absurdly rich through hyper-speed consumerism and explicitly avoiding social responsibilities. He’s not the saviour, he’s the problem.

“Nature gives us life. It is beautiful but it is also fragile. I was reminded of this in July when I went into space.” Jeff Bezos.
That’s Cop26’s Marie Antoinette moment.

Columnist Nick Timothy pointed out that Bezos still had significant work to do when it comes to making his own businesses more sustainable as well.

Pay your taxes, treat your workers better, reflect on your behaviour, and reduce your own carbon footprint.

Until then, do shut up. https://t.co/CuEopMBtJ5

And the furious tweets from everyone who caught his speech just kept on coming.

Billionaire Jeff Bezos Takes Stage At COP26 To Pledge $2 Billion Towards Nature Conservation…there is so much to say on this…. https://t.co/kvRxM63lBB

A flight from London to Rome produces more than the average Sonalian does in a year.

If everbody did as Jeff Bezos did, and travelled in rocket to space or just fly to Glasgow to tell us this, then woe betide our CO2 emissions.https://t.co/0FBGKLbG9Z

Billionaire Jeff Bezos Takes Stage At COP26 To Pledge $2 Billion Towards Nature Conservation…there is so much to say on this…. https://t.co/kvRxM63lBB