While it may feel a little too early to mention the ‘C’ word yet (sorry Mariah Carey), retailers are already trying to get us in the festive spirit in a bid for us to spend our Christmas cash.

Disney has become one of the first major brands to release their Yuletide ad, and we’ll admit, it could warm even the Grinch’s cold heart.

Entitled The Stepdad, it tells the story of a man called Mike moving in with his new partner Nicole’s family and his struggle to bond with her two young children, Max and Ella.

The ad focuses on a precious storybook filled with Disney and Pixar characters, which was given to Max by his father.

As Mike becomes accepted by the children, he is eventually able to make the stories on the book come to life.

The 2021 Disney Christmas advert has been released

The ad makes reference to a number of films under the Disney umbrella, including Moana, Toy Story, Spider-Man, Black Panther Star Wars and Frozen.

And eagle-eyed viewers may have also spotted that the new clip serves as a continuation of the 2020 advert, with the mother Nicole being the same young girl who was given the stuffed Mickey Mouse in last year’s promotional film. 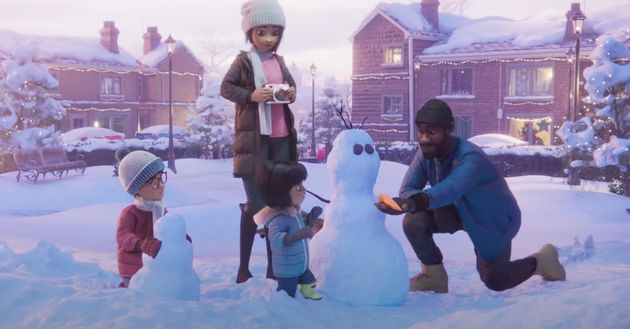 The 2021 ad has been soundtracked by Gregory Porter with his original charity track Love Runs Deeper.

The animation short also supports children’s charity Make-A-Wish, as part of Disney’s festive retail campaign, From Our Family To Yours.

Love Runs Deeper will be available for download from Wednesday, with 100% of the proceeds between now and the end of the year going to Make-A-Wish.