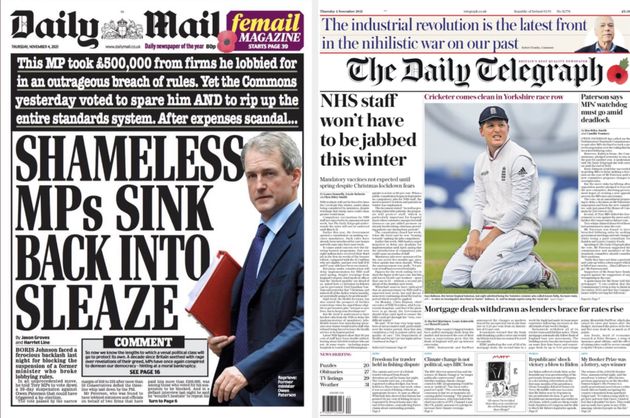 The Daily Mail veered away from its usual pro-Tory stance on Thursday and denounced a government-led decision – while The Daily Telegraph barely mentioned the huge scandal which rocked Westminster on Wednesday.

The two newspapers were reporting on the significance of a Commons vote which saw MPs decide not to suspend Tory MP Owen Paterson for 30 days.

This shock decision came after the cross-party Standards Committee found Paterson was guilty of an “egregious” breach of lobbying rules and recommended suspending him from parliament.

Paterson had used his position as an MP to the benefit two companies which paid him £100,000 a year as a consultant, a move which goes against parliamentary rules.

Despite an overwhelming number of Conservative MPs voting not to suspend Paterson – thus undermining the Standards Committee – The Mail cleared its entire front page to denounce the Commons’ decision with the headline: “Shameless MPs sink back to sleaze.”

The really striking thing is the contrast between the Telegraph’s strong stance on MPs’ expenses and its current stance on Owen Paterson and MPs guilty of sleaze. https://t.co/qb0ZlXY3EH

A damning caption next to a large image of Paterson reads: “This MP took £500,000 from two firms he lobbied for in an outrageous breach of rules. Yet the Commons yesterday voted to spare him AND to rip up the entire standards system.”

It also refers back to the scandal of 2009 where MPs were found to have put in obscene requests for taxpayers’ money to cover personal expenses.

The Mail suggested that MPs just want to undo the very system which disciplines them.

The newspaper does not emphasise that this move was actually led by Conservatives MPs, who were whipped to support it by the Tory government.

The Telegraph, where prime minister Boris Johnson used to work as a political correspondent, did not take the same approach.

The newspaper did not lead with the story despite the furore around it and instead focuses on a racism row in cricket along with a report that NHS staff might not have to be jabbed after all.

The Westminster scandal only takes up a small column, and leads with a much more sympathetic headline: “Paterson says MPs’ watchdog must go amid deadlock.”

The newspaper includes an interview with former minister, who claims the alleged lobbying probe made his life “a living hell”.

Notably, Johnson once described The Telegraph as his “real boss” according to his former senior aide Dominic Cummings.

Fellow right-wing newspaper The Daily Express also failed to emphasise just how serious the Commons’ vote was and instead took Paterson’s side.

The story gets a smaller mention on the front page and runs with the headline directly from the Tory MP: “After two years of hell, I can now clear my name.”