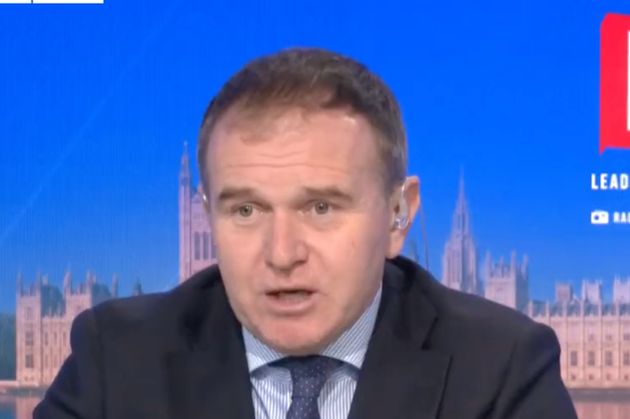 Environment secretary George Eustice put his foot in it on LBC

George Eustice struggled to justify why world leaders had flown from around the globe to attend COP26 on Tuesday.

The UN’s summit in Glasgow has been hailed as a last-gasp bid to stop catastrophic climate change – and yet hundreds of delegations flew into the city via private jets, one of the most damaging modes of transport, seemingly undermining the very message of the conference before it even began.

LBC’s Nick Ferrari asked the environment secretary: “Do we really need somewhere in the region of 200 to 300 private jets, a motor convey for the [US] president of 22 cars and a fleet of helicopters.

“This is rather hypocritical isn’t it, secretary of state?”

“Well, look, it’s always possible to see it in those sort of terms,” Eustice replied.

“I take a slightly bigger picture view on this. We’re only going to tackle this crisis if we can get governments around the world to make the right commitments and take the necessary steps to hit them.

“Having an event like this over two weeks where the world works together on a shared endeavour is an important thing to do and that does require people to travel.”

Ferrari persisted and pointed out: “But Mr Eustice – they [world leaders] seek to lecture us – they lecture the good people of Camborne and Redruth as they arrive in convoys of 22 cars, private jets which are gobbling out goodness knows how much CO2 emissions – and they lecture us.

Eustice still denied that the government is lecturing the public, claiming they were actually supporting technologies and decarbonising electricity to get to Net Zero CO2 emissions.

“It’s not really about lecturing people abut how they live their lives, but it is about having the policy agenda at government level,” the environment secretary claimed.

Ferrari then suggested there could be a danger that the government is turning people against it with “this level of hyperbole”.

Eustice’s colleague foreign secretary Liz Truss also fought back over questions about the methods world leaders had travelled to Glasgow on Monday.

She told Sky News that giving up flying is not the solution to reducing CO2 emissions – even though it is one of the most polluting activities out there.

She also claimed, “it’s really important that we do have people face to face”, when asking global leaders to make serious pledges about climate changes.