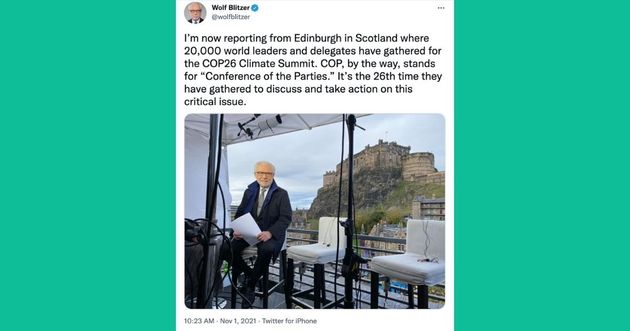 CNN’s lead political anchor posted about being in Edinburgh

CNN’s leading political anchor Wolf Blitzer tweeted that he was in Edinburgh for COP26 – a pivotal summit which actually takes place 45 miles away in Glasgow – and Twitter couldn’t believe it.

Early on Monday morning, the first day of the international summit, Blitzer tweeted: “I’m now reporting from Edinburgh in Scotland where 20,000 world leaders and delegates have gathered for the COP26 Climate Summit.”

In the anchor’s defence, US president Joe Biden is actually based in Edinburgh for the conference.

That did not stop his Twitter critics though, as the journalist came under fire for making a mistake often associated with Americans – muddling up key UK locations.

Some people just thought it was typically American

How very US media. Report on an event in a different country, but get the cities mixed up. COP26 is in Glasgow, not Edinburgh https://t.co/pdWzxy3WmH

I love that @wolfblitzer (great name by the way) has travelled thousands of miles to come to the UK from Canada (US-Canada same thing right, I mean it’s all north America) for #COP26 but couldn’t be bothered doing an extra 40 odd miles to get to the correct city. https://t.co/hl7OfgZwGu

Blitzer did seem to allude to his mistake in a following tweet, where he explained that CNN was going to have “live coverage of President Biden’s remarks at the COP26 climate summit in Glasgow”.

He then added: “Air Force One landed in Edinburgh and Biden made the drive to Glasgow where he was greeted by UK prime minister Boris Johnson and UN Secretary General Antonio Guterres.”

He notably did not take his first tweet down, though.

2 hours have gone by and this still hasn’t been corrected or deleted?

not a good look CNN