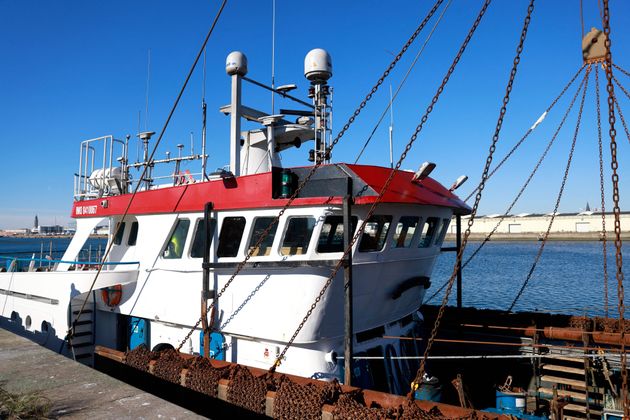 The environment secretary has warned France the UK could retaliate if they follow through on their threats in an escalating fishing row.

George Eustice said “two can play at that game” when asked what the UK government would do if France blocks British boats from ports and tightens border checks.

It comes after a British trawler was seized by France and another fined during checks off of Le Havre on Thursday.

Eustice described France’s actions as “unacceptable” and told Sky News: “We don’t know what they’ll do, they said they wouldn’t introduce these measures until Tuesday probably at the earliest so we will see what they do.

“But if they do bring these into place, well, two can play at that game and we reserve the ability to respond in a proportionate way.”

The UK has condemned “unjustified” threats from France and summoned the country’s ambassador.

Foreign secretary Liz Truss has called on Catherine Colonna to explain the “disappointing and disproportionate threats”.

French authorities said the detained vessel did not have a licence but Eustice insisted the European Union did grant a licence to the trawler. He said it was “unclear” why it was allegedly later withdrawn from the list given to the EU.

The secretary of state also said Boris Johnson could raise the fishing row with Emmanuel Macron at the G20 in Rome.

He added: “There are elections coming up in France, I’ve seen suggestions that might be a factor. But we have to deal with what we’re faced with here, which is France threatening us and actions that are completely disproportionate, are not acceptable, and would be a breach of the agreement that we have with them.

“That’s why we’re going to be raising that with their ambassador, raising it with the (European) Commission.”

France was angered by the UK and Jersey’s actions last month when they denied fishing licences to dozens of French boats.

The French argued it breached the Brexit deal and warned they would block British boats from some ports next week and tighten checks on UK boats and trucks if the dispute is not resolved by November 2. They also warned they could cut electricity supplies to Jersey.

The country’s Europe minister Clement Beaune told French TV news channel CNews: “We need to speak the language of force because, unfortunately, that seems to be the only thing this British government understands.”

A UK government spokesman said: “The proposed French actions are unjustified and do not appear to be compatible on the EU’s part with the Trade and Co-operation Agreement (TCA) or wider international law.

“We regret the confrontational language that has been consistently used by the French government on this issue, which makes this situation no easier to resolve.”