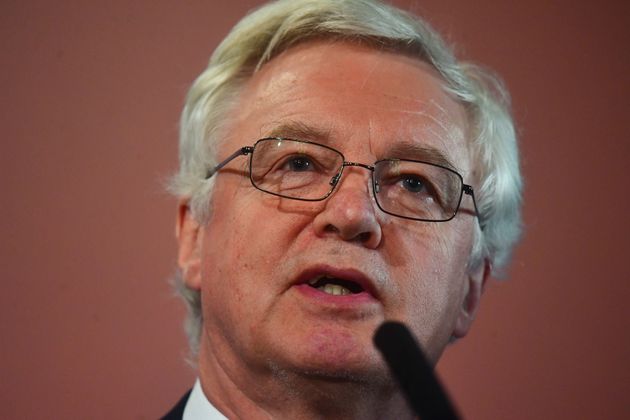 ‘If anybody has a right to asylum it’s someone whose life is at risk because they helped us,’ David Davis said.

Senior Conservative David Davis has said the UK should be looking to accept “north of 50,000” refugees following the Taliban’s takeover of Afghanistan.

The former Brexit secretary told HuffPost UK that Britain had more of a “direct moral responsibility” to accept refugees from Afghanistan than it did following the civil war in Syria, after which the UK agreed to settle 20,000 refugees over five years.

A massive programme to evacuate British nationals, officials, diplomats and local allies is currently underway in Afghanistan, as those who helped the British war effort fear of reprisals from the country’s new rulers.

The Taliban held its first press conference on Monday since taking over Afghanistan, in which a spokesman sought to give assurances that “nobody will be harmed”.

“Whoever has worked in the military, in translation, we have given amnesty to everybody, there is no revenge,” they said.

But Davis, who previously served in the military, expressed scepticism that the Taliban could be believed and said the UK needed to kickstart a “big intelligence operation” to screen those seeking a safe haven in the UK.

“If anybody has a right to asylum it’s someone whose life is at risk because they helped us,” he said.

“We’ve invented capacity for other things over the last two years, let’s do it for this.”

The former cabinet minister also urged Boris Johnson to convene an emergency G7 summit to discuss the fallout of the Taliban’s takeover – something the prime minister signalled he would do following a call with German chancellor Angela Merkel.

On the agenda will be how the western nations choose how many refugees to open their doors to.

So far the government has refused to put a number on how many Afghan refugees it will accept into the UK, but foreign secretary Dominic Raab said Johnson would “set out the details in due course”.

But Davis said the UK should exceed the 20,000 Syrian refugees it agreed to take over a five-year period in the aftermath of the civil war.

“I think we’ve got a much bigger responsibility than that – you’re probably talking multiples of that – north of 50,000 people.”

The Lib Dems have said the UK should take “at least” 20,000 refugees from Afghanistan.

But Keir Starmer, the Labour leader, said on Tuesday it was not “a helpful discussion” to talk about a number.

“The first discussion has to be: is there a plan, is there a strategy of safe and legal routes for refugees to come out of Afghanistan, and how quickly can that be put in place?” he said.

Davis was one of 24 Tory MPs who rebelled over the government’s decision to reduce its international aid budget from 0.7% to 0.5% of total national income – the equivalent of about £4bn.

At the time he said the decision would have “devastating consequences across the world”.

Raab has since said the UK will increase aid to Afghanistan by 10%, a move Davis branded “meaningless” in the context of the UK cutting its direct assistance to the country by an estimated 78%.

And asked whether the refugee question would become the next issue to divide Tory MPs, he replied: “I think they will quite properly raise security questions about it, as would I, but that just makes it difficult.

“These are people to whom we owe a moral responsibility.”