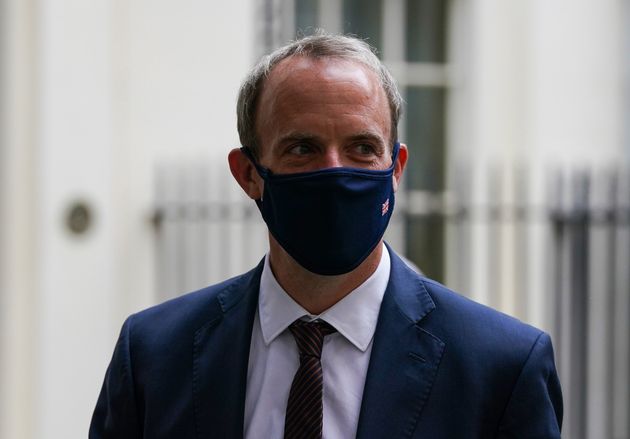 Foreign secretary Dominic Raab said nations across the world were ‘caught by surprise’ at the pace of the Taliban’s advance.

Dominic Raab has said the UK could increase aid to Afghanistan by just 10% – having recently cut direct assistance to the country by more than three quarters.

The foreign secretary said the UK would now “reconfigure” its aid budget to Afghanistan following the dramatic collapse of the country to the Taliban at the weekend – a development he admitted caught several nations “by surprise”.

The UK and other western nations have come under increasing pressure to offer help to the Afghan people following distressing scenes as the airport on Monday, in which people desperately clung on to planes in an attempt to flee capital city Kabul.

Many are fearing for their lives under Taliban rule, and particularly those that worked in the western-backed government or worked with western forces during the 20-year war.

Raab told the BBC that while the aid budget would be tweaked, the UK would not give “the security capacity building money” it previously gave to the government to the Taliban.

“I expect that we will increase our aid budget for development and humanitarian purposes, probably by 10% is what I have in mind on last year,” he said.

“We want to try and make sure it won’t go through the Taliban, but make sure that we can alleviate the humanitarian suffering.”

But already critics are pointing out that the 10% increase would not make up for the drastic cut the government made to international aid as recently as April.

That month the government cut its international aid budget from 0.7% to 0.5% of total national income – the equivalent of about £4bn.

The move opened a rebellion in the Conservative Party as senior Tories, including former prime minister Theresa May, accused the government of “turning its back on some of the poorest in the world”.

Foreign affairs spokesperson Layla Moran said: “It is outrageous that the foreign secretary has come out of hiding to announce this pitiful amount of support.

“This is the same person who cynically slashed aid to vulnerable women and girls in Afghanistan, making life even harder for people in the country.

“Raab and his heartless government cut aid funding to the bone and now they’re trying to put a sticking plaster over their failures.

“They should do the honourable thing and immediately recommit pre-aid cut levels to Afghanistan to support those women and girls who need it now more than ever.

“Dominic Raab’s legacy as foreign secretary will no doubt be one of shame and downright incompetence.”

On Monday Raab suggested the UK could withhold aid as “leverage” against the Taliban if they chose not to reform. The group is renowned for its strict application of sharia law that prevents women from going to school or gaining employment, extreme punishment for crimes and public executions.

However, he later appeared to backtrack from that position, saying: “I don’t think we will condition the humanitarian relief we provide to ordinary Afghans on what the Taliban does.”

Raab also came under heavy fire for being on holiday abroad while the Taliban’s advance on Kabul gathered pace over the weekend.

The foreign secretary admitted people were “caught by surprise”.

“I haven’t spoken to an international interlocutor, including countries in the region over the last week, who hasn’t been surprised,” he told Sky News.

“We saw a very swift change in the dynamics, and of course this has been part and parcel of the withdrawal of Western troops, but it has also been the way and the approach of the Taliban.

“Of course it’s been a test for the Afghan security forces. All of those factors have been very fluid. But no one saw this coming. Of course we would have taken action if we had.”