WASHINGTON ― As the Taliban continue to consolidate their grip over Afghanistan and begin dealing with the international community, they can do so with endorsements and praise from an American president.

No, not current President Joe Biden but his predecessor, Donald Trump – the one who agreed to the “peace” deal so heavily skewed in favour of the terrorist group that it essentially assured its returned to power.

“We had a good long conversation today and, you know, they want to cease the violence. They’d like to cease violence also,” Trump said on March 3, 2020, just days after the agreement – which was made with the Taliban but not the US-allied Afghan government – was signed.

He told reporters he’d had a 35-minute phone call with the Taliban leader and had told him: “It is a pleasure to talk to you. You are a tough people and have a great country, and I understand that you are fighting for your homeland.”

Even now, with the Taliban having overrun the Afghan government and taken back control, Trump continued praising the group, known for its murderous, theocratic tactics. “I will tell you they’re good fighters. You have to give them credit for that. They’ve been fighting for a thousand years. That’s what they do is they fight,” Trump told Fox Business on Tuesday.

In fact, by the time of the February 2020 agreement, the Taliban had essentially merged with al Qaeda, the terrorist group it had harboured leading up to the Sept. 11, 2001, attacks on America. The Taliban’s refusal to hand over Osama bin Laden and other al Qaeda leaders to the US was the basis for the US invasion and removal of the Taliban from power in the first place.

“I was at a loss as to where he got a lot of his information,” a Trump White House official said on condition of anonymity.

Indeed, as Trump and some of his top aides attack Biden for the chaotic departure from Kabul that threatens to leave Americans as well as Afghan nationals who helped the US to the mercy of the Taliban regime, they do so despite having set up the conditions that made a smooth evacuation and withdrawal nearly impossible without yet another troop surge.

That the deal was negotiated with the Taliban, without the Afghan government, immediately sent signals about their future. The Taliban’s lead negotiator, in fact, was released from a Pakistan prison at Trump’s request. 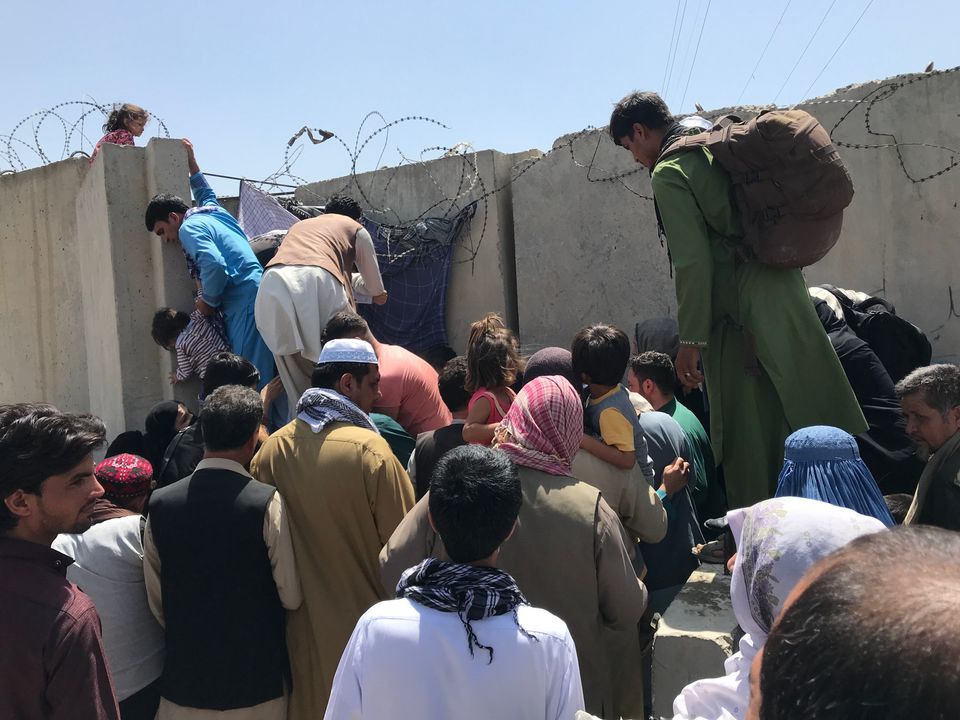 People struggle to cross the boundary wall of Kabul’s Hamid Karzai International Airport on Monday to flee the country.

And in one of his final acts before leaving office, Trump reduced the US military presence in the country to just 2,500 troops – not nearly enough to maintain control of Kabul, let alone all the major cities and military installations, including Bagram Air Base, without the help of the Afghan government’s police force and army.

Those security units, however, largely surrendered or simply vanished as a Taliban sweep of the country looked ever more inevitable.

The two major commitments the Taliban made in the agreement in return for the complete withdrawal of US forces were to stop its support for terrorists and to negotiate an agreement with the Afghan government. The Taliban reneged on both almost immediately, continuing its relationship with al Qaeda and violently seizing territory from the US-backed government.

The Trump official said these concerns were laid out to Trump, and a number of top aides opposed both seeking an agreement at all and then continuing with it once it was clear the Taliban were not honouring it. That advice was rejected. “The president was just anxious to be out,” the official said, adding that it was considered a success to talk Trump out of hosting the Taliban at Camp David in the days surrounding Sept. 11, 2019, as Trump had wanted. “There were enough people who said: ‘That’s just an awful idea.’”

And though Trump and his aides have criticised Biden for not getting out thousands of Afghan interpreters and others who helped US forces through the years, it was Trump’s anti-immigrant policies that led to so many still being in Afghanistan.

A program designed to bring 4,000 Afghan visa applicants a year into the United States was effectively killed over Trump’s term, said Matt Zeller, co-founder of the group No One Left Behind. “They got it to down to essentially zero by the time they left office… That’s where this chaos begins.”

Trump tried to overthrow American democracy to remain in power despite losing his reelection bid by 7 million votes. He has in recent days attacked Biden for his handling of the US evacuation from Kabul, which has required the redeployment of thousands of troops to the city’s airport as thousands of people hoping to leave must risk detainment at Taliban checkpoints as well as street violence for the chance to board an evacuation flight.