Paris St-Germain have opened initial discussions to gauge Paul Pogba’s interest in joining them from Manchester United either this summer or next, when the France midfielder, 28, is available for free. (Athletic, subscription required)

Tottenham are looking at signing Dusan Vlahovic from Fiorentina, who would demand about £50m for the Serbia striker, 21. (Telegraph)

Ajax have confirmed that both Arsenal and Lyon have shown interest in their 25-year-old Cameroon goalkeeper Andre Onana, who is serving a ban for doping violations. (Voetbal International, via Sun)

Barcelona have still not agreed a new deal with Ilaix Moriba, the 18-year-old Spanish midfielder who is out of contract next summer and has attracted interest from Premier League clubs. (Marca)

Juventus are meeting with Sassuolo officials again in the hope of completing a deal for Italy midfielder Manuel Locatelli, 23, and also want to sign Brazilian forward Kaio Jorge, 19, from Santos. (Tuttosport – in Italian)

Crystal Palace, Newcastle and Monaco are among a number of clubs interested in Angers’ former France Under-21 midfielder Angelo Fulgini, 24. (Mail)

Manchester United have a transfer deal for Wolves’ Portugal midfielder Ruben Neves, 24, ‘reasonably far down the line’. (Eurosport, via Express)

Tottenham sold Belgium defender Toby Alderweireld to Qatari side Al-Duhail for just £3m even though he had a contract until 2023 and only being 32. (Sun)

Leeds United have been told they must pay £5m to sign Scottish left-back Josh Doig, 19, from Hibernian this summer. (Leeds Live)

Liverpool have missed out on potentially millions of pounds after losing Algerian left-back Yasser Larouci, 20, on a free transfer to Troyes, one of several clubs under the City Football Group banner. (Mirror)

Ethan Ennis had talks with Chelsea this summer but the 16-year-old midfielder has chosen to join Manchester United after turning down a new contract with Liverpool. (Liverpool Echo)

Belgian striker Aaron Leya Iseka, 23, is set to join Championship side Barnsley from Toulouse after spending last season on loan at Metz. (L’Equipe – in French) 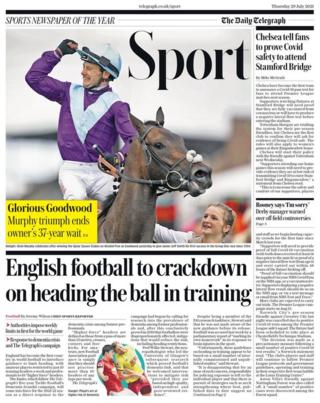