Barcelona’s announcement that Argentina forward Lionel Messi, 34, will not stay at the club has “opened the door for a shock move” to Manchester City. (Manchester Evening News)

Paris St-Germain have immediately been linked with Messi, but the French capital is seen as just one possible destination for the in-demand Argentine. (Le Parisien – in French)

PSG are seen as favourites to sign the six-time Ballon d’Or winner, but a move to America to play Major League Soccer cannot be discounted. (Mail)

Romelu Lukaku’s proposed move back to Chelsea could be about to stall as Inter Milan chairman Steven Zhang wants to take his time before deciding whether he wants to sell the 28-year-old Belgium striker. (Gazzetta dello Sport – in Italian)

Manchester United remain keen on signing England defender Kieran Trippier, but Atletico Madrid are refusing to budge on their £34m asking price for the 30-year-old. (Sun)

Arsenal have made a bid of about £17m for Lazio’s Argentina striker Joaquin Correa, 26, which is “considered inadequate” by the Rome club. (Corriere dello Sport, via Sport Witness)

Southampton have enquired about signing Tammy Abraham, 23, on loan from Chelsea as they begin their search for a replacement for fellow England striker Danny Ings, 29, who joined Aston Villa earlier this week. (Talksport)

Arsenal are plotting to sign English goalkeeper Aaron Ramsdale and Norway midfielder Sander Berge from Sheffield United, but a combined bid of £50m may not be enough to land the 23-year-old pair. (Star)

Lyon’s French midfielder Houssem Aouar, 23, is holding out for a move to Arsenal this summer. (Sun)

Leicester are to step up their hunt for a new centre-back after France Under-21 defender Wesley Fofana, 20, suffered a broken leg during Wednesday’s friendly match against Villarreal. (Sky Sports)

Jose Mourinho’s Roma have been linked with a move for Fulham’s 25-year-old Cameroon midfielder Andre-Frank Zambo Anguissa, who would cost the Serie A club about £21m. (Gazzetta dello Sport, via Sport Witness)

Crystal Palace are in advanced talks with Blackburn over a deal for 24-year-old English striker Adam Armstrong, who is valued at about £20m. (Sky Sports)

Palace lead the race for Armstrong’s signature, despite having an initial offer rejected and Norwich City, Southampton and Watford all making bids of their own. (Mail) 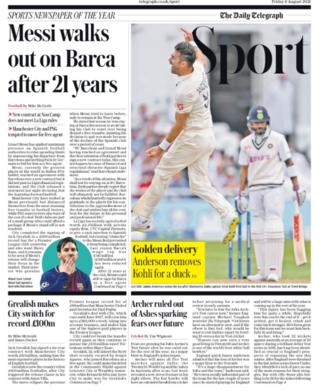