Romelu Lukaku is on the brink of completing a £97.5m move from Inter Milan to Chelsea after the 28-year-old Belgium striker flew to London on Wednesday evening. (Sky Sports)

Arsenal are in advanced talks with Sheffield United to sign 23-year-old England goalkeeper Aaron Ramsdale, with the Gunners set to pay an initial fee of £24m that could rise to £30m with add-ons. (Football. London)

Manchester United will announce the signing of France centre-back Raphael Varane from Real Madrid on Thursday after the 28-year-old completed his medical on Wednesday. (Sun)

Chelsea have accepted a £34m bid from Roma for England striker Tammy Abraham, 23, that includes a buy-back clause. (Goal)

Roma manager Jose Mourinho will speak with Abraham on Thursday to try to convince him to join the Serie A club. (Mirror)

However, Arsenal will offer their France striker Alexandre Lacazette, 30, to Roma in order to pave the way for Abraham to move to the Gunners. (Calciomercato – in Italian)

Sevilla are willing to sell Chelsea target Jules Kounde, however the Blues are unwilling to meet the 22-year-old France defender’s £68m release clause and may instead include a player in their offer. (Evening Standard)

Sevilla would want an additional £20m in return for allowing Chelsea to pay the fee for Kounde in instalments, with the Blues concerned about Financial Fair Play rules. (90min)

Lyon are in negotiations with Liverpool over a deal to sign the Reds’ 29-year-old Switzerland midfielder Xherdan Shaqiri. (Sky Sports)

Inter were set to propose a £50m offer for Manchester United’s France forward Anthony Martial – but the Premier League side have no intention of selling the 25-year-old. (Mail)

Lazio are closing in on a loan deal for Arsenal’s Uruguay midfielder Lucas Torreira, 25, with the option to make the move permanent at the end of the season. (Gazzetta dello Sport – in Italian)

Newcastle United and Joe Willock are still a distance apart when it comes to agreeing personal terms, after the Magpies agreed a £25m fee with Arsenal for the 21-year-old English midfielder. (Sky Sports)

Tottenham are set to step up their attempts to sign Sporting Lisbon’s Joao Palhinha, with manager Nuno Espirito Santo a long-term admirer of the 26-year-old Portugal midfielder. (A Bola – in Portuguese)

Newcastle have opened talks with Roma over a deal to sign 23-year-old Spanish winger Carles Perez on loan with the option to buy. (Calciomercato – in Italian)

Referees could offer in-game explanations of key decisions from as early as next season under plans being proposed by the Premier League, with automatic offside calls also in development. (Telegraph – subscription required) 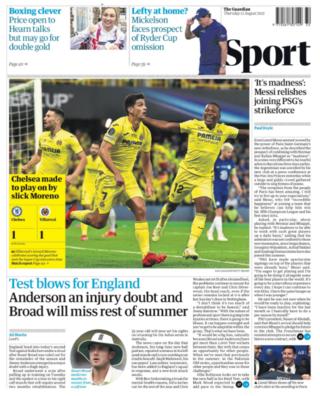