Chelsea have spoken to the agent of Bayern Munich and Poland striker Robert Lewandowski, 32, about a possible move to Stamford Bridge. (Bild, via Sun)

However, the Gunners have been told to raise their offer for Ramsdale to more than £32m after having two offers rejected. (Times)

German forward Timo Werner, 25, is open to leaving Chelsea this summer and would ideally prefer a return to the Bundesliga. (90min)

Manchester United are leading Arsenal in the race to sign Portugal midfielder Ruben Neves, 24, for £35m from Wolves this summer. (TalkSport)

But Real Madrid have also already made contact with Gortezka about a move. (Bild, via Marca)

Villa are also ready to move for Bayer Leverkusen’s 23-year-old Jamaican winger Leon Bailey, who is valued at between £25m-£30m. (Daily Mail)

Crystal Palace are negotiating with Schalke over a deal for Turkey defender Ozan Kabak, 21. He could cost £10-12m. (Guardian)

Newcastle United are likely to pay £13m if they are to sign 21-year-old Sweden midfielder Jens-Lys Cajuste from FC Midtjylland. (Chronicle)

Newcastle hope to reach agreement with Southampton over a £4m deal for Gabon midfielder Mario Lemina, 27, this week. (Daily Mail)

Leeds United are close to signing Chelsea’s 18-year-old English midfielder Lewis Bate. The Blues are expected to include a sell-on clause, but not a buy-back option. (Leeds Live)

Juventus are close to agreeing a deal with Sassuolo for Italy midfielder Manuel Locatelli, 23. (Corriere dello Sport – in Italian)

Barcelona are facing a wage bill crisis and could be forced to make £441m worth of cuts to meet La Liga’s salary cap. (Star) 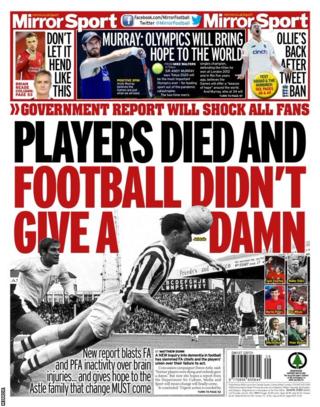 The back page of Thursday’s Mirror