Aston Villa are to restart talks with England midfielder Jack Grealish, 25, next week and are willing to offer him a new deal to ward off advances from Manchester City. (Express and Star)

Premier League champions City, however, have begun negotiations with Villa for the playmaker – and a decision about whether a deal for Grealish can be struck is expected to be made within days. (Guardian)

Manchester City manager Pep Guardiola hopes to have a deal for Grealish done in time for the Community Shield on 7 August. (Star)

West Ham are preparing a £20m bid for Chelsea’s Kurt Zouma, 26, who is said to prefer a cross-London move rather than be used as a makeweight in a deal with Sevilla for fellow French defender Jules Kounde, 22. (Mail)

Former Arsenal boss Arsene Wenger has been linked with the vacant Switzerland job. The Frenchman has not worked in management since his 22-year reign at the Gunners came to an end in 2018. (Blick, via Mail)

United States defender Sergino Dest, 20, is determined to stay at Barcelona and has rebuffed approaches from Arsenal and Bundesliga clubs Bayern Munich and Borussia Dortmund. (ESPN)

Belgium striker Romelu Lukaku, 28, has made it clear that he intends to stay with Italian champions Inter Milan after “immediately” rejecting an offer to return to Chelsea. (Gazzetta dello Sport – in Italian)

Sassuolo chief executive Giovanni Carnevali has said they will only entertain offloading 23-year-old Italy midfielder Manuel Locatelli, who has been linked with a move to Arsenal and Juventus, if the right offer is made well in advance of the transfer window closing. (Gazzetta dello Sport, via Mirror)

Atletico Madrid and England defender Kieran Trippier, 30, expects his move to Manchester United will take until the end of the transfer window to go through. (Manchester Evening News)

Arsenal are ready to listen to offers for 32-year-old Brazilian winger Willian as they try to reduce their wage bill. (Star)

Real Madrid will be willing to let Norway midfielder Martin Odegaard leave for around £43m, with Arsenal interested in the 22-year-old after his loan spell in north London last season. (ESPN)

AC Milan have made Chelsea’s 28-year-old Morocco winger Hakim Ziyech their top target as they look to bolster their attacking options. (Calciomercato – in Italian)

Aston Villa are preparing to begin talks with goalkeeper Emiliano Martinez about a new long-term deal after his efforts in helping Argentina win the Copa America generated fresh interest in the 28-year-old. (90min)

Torino have tabled a “very big” contract extension offer for Italy striker Andrea Belotti, 27, as they try to fend off interest from Jose Mourinho’s Roma and Arsenal. (Tuttomercatoweb, via Goal)

France striker Karim Benzema, 33, is set to sign a new deal with Real Madrid, keeping him in the Spanish capital until the summer of 2023. (Marca – in Spanish)

Watford will make a move for St Mirren’s 24-year Republic of Ireland midfielder James McGrath if they fail in their efforts to sign Scottish 21-year-old Lewis Ferguson from Aberdeen. (Sun)

Newcastle United have overtaken Aston Villa in the race to sign former England Under-21 defender Axel Tuanzebe, 23, on loan from Manchester United this summer. (Football Insider) 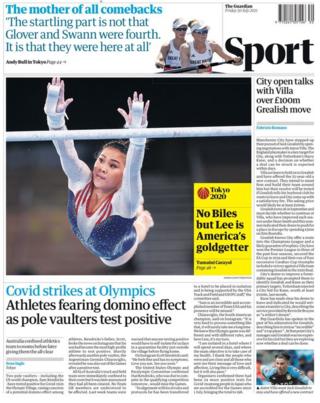