Boxer Lauren Price secured her place in the gold-medal middleweight bout at Tokyo 2020 after Great Britain won an Olympic medal in the women’s hockey for the third Games in a row.

Team GB are sixth in the Tokyo medal table with 16 golds.

There are further chances for golds on Friday in athletics and cycling.

Britain have 52 medals in total, with 18 silvers and 18 bronzes.

With three days of competition left, Team GB are aiming to finish above Australia and the Russian Olympic Committee, who have won 17 and 16 golds respectively. 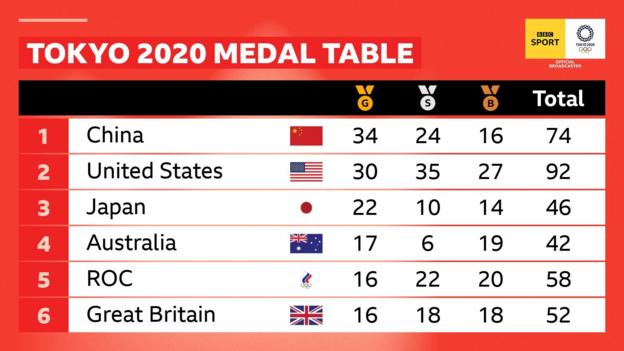 Where could Team GB win more medals on day 14?

Sprinter Dina Asher-Smith is back after injury saw her eliminated in the 100m semi-finals and withdraw from the 200m, with the 25-year-old looking to lead Britain’s bid for a relay medal in the women’s 4x100m relay final (14:30 BST).

In the velodrome, Katie Archibald and Laura Kenny ride for GB in the madison at 09:15.

Kenny, 29, could become the first British woman to win gold at three Olympic Games. Any medal would see her join individual dressage champion Charlotte Dujardin on six medals as the nation’s most-decorated woman.

Price, 27, is a talented and versatile athlete having played football for Wales and been a kickboxing world champion – with the Duke of Cambridge among her fans.

Also a former taxi driver, Price switched her full focus to boxing after winning middleweight bronze at the 2014 Commonwealth Games.

Now she is the reigning world, Commonwealth and European champion, with the shot at the Olympic title to come on Sunday.

Price won her semi-final bout with Dutch opponent Fontijn on a split decision to go into the gold-medal round.

“It’s mad to be honest,” said Price, who won 52 caps for the senior Wales football team.

“It’s everyone’s dream to get to the final and I’m going to do the utmost to bring back that gold.”

Five years ago in Rio, Great Britain’s women’s hockey team won their first Olympic gold in a moment which has gone down in the nation’s sporting folklore.

But expectations were much lower going into Tokyo following a turbulent Olympic cycle.

Several star names including captain Kate Richardson-Walsh and forward Alex Danson have retired, while there have been injuries to other key players and the upheaval of head coach Danny Kerry leaving to take over the men’s side.

In 2019, they were thrashed 8-0 by the Netherlands and needed to beat Chile in a two-legged qualifier to even reach Tokyo.

“This cycle has not been too much of a rollercoaster because there’s not been many highs,” captain Hollie Pearne-Webb told BBC Sport.

“Olympic bronze even a few months ago was not in our wildest dreams.”