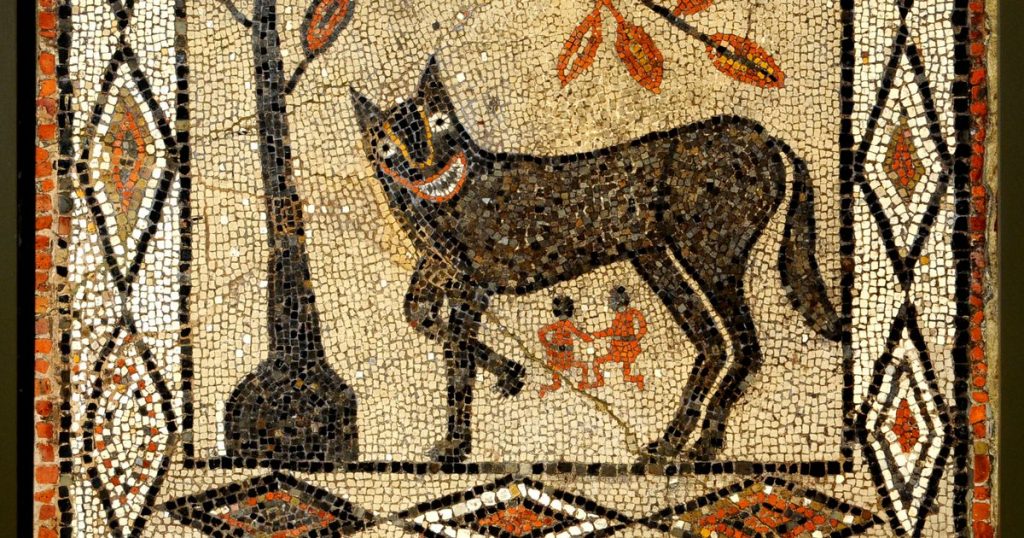 It is a legendary story in Leeds.

With its unmistakable sloping stance and famous winning smile it is one of the city’s most instantly recognisable ancient exhibits, the Wonky Wolf.

Discovered in the 1840’s near the town of Aldborough, North Yorkshire, the eye-catching wolf mosaic is believed to date from around 300-400 AD.

The artist’s distinctive style is thought to be an example of provincial art from Roman Britain and the mosaic is one of several found in the town.

Despite its seemingly humble origins, it depicts one of history’s best-known legends, the myth of twin brothers Romulus and Remus.

Raised by a she-wolf, together the brothers became great leaders before a dispute saw Remus killed by his brother, who went on to found the city of Rome.

The epic story will be among several brought to life during Leeds City Museum’s myths and legends week, with a programme of fun workshops, performances and storytelling sessions.

These include a chance to make a headband based on the fearsome gorgon Medusa on August 3 and 5 as well as an exciting Perseus and the Gorgon’s Head story performance on August 17.

Natalie Haigh, Leeds City Museum’s learning and access officer, said: “Our wolf always puts a smile on people’s faces and over the years it’s become a firm favourite with staff and visitors. It’s certainly nothing if not unique.

“The legends behind these objects have survived for thousands of years too, passed from generation to generation across many different cultures.

“That’s in large part because they are such fantastic stories, which have captured the imaginations of people of all ages over the centuries.

“By bringing them to life for families over the summer and exploring how they link to objects in our collection, we hope they can inspire a whole new generation to think about history in a different way.”

The lopsided lupus will feature in a new family-friendly trail around the museum over the holidays exploring how objects in the collection link to some of the most enduring tales from across thousands of years of world culture.

Events over the summer are free but many will require pre-booking a free ticket. Visitors are advised to check the Museum’s Facebook page for any updates before they visit.

Councillor Jonathan Pryor, Leeds City Council’s executive member for economy, culture and education, said: “It’s wonderful to see that visits to our museums will be playing such an important part in the summers of children and families across Leeds again this year.

“The teams on site always plan an imaginative and inspiring programme of events and I know they will be looking forward to educating and entertaining visitors over the school holidays.”