After 31 days and 66 games The Hundred reaches its finale on Saturday at Lord’s – the historic home of cricket.

Four teams – two men’s and two women’s – meet in two finals, each bidding to be crowned the first champions of The Hundred.

Weather permitting (more on that later), favourites Southern Brave meet Oval Invincibles in the women’s final at 15:00 BST, followed by an eye-catching men’s final between the Brave and Birmingham Phoenix at 18:30.

Both games are live on BBC Two, BBC iPlayer and the BBC Sport website from 14:30 on a bumper day of cricket on the BBC.

“The first 100-ball final, to be there is very special,” said Southern Brave bowler George Garton, the Match Hero in his side’s win in Friday’s eliminator.

“The crowds, atmosphere and everything around the Hundred, it is probably the one of the most anticipated white ball game for a while – definitely since the [men’s] World Cup final [in 2019].”

The Invincibles reached the final with a thrilling comeback win against Birmingham Phoenix in the eliminator on Friday.

Their run has been led by their supreme captain Dane van Niekerk while they also have the leading wicket-taker in Tash Farrant and the exciting 17-year-old all-rounder Alice Capsey.

The new tournament has been much-debated but the final, at a sold out Lord’s, comes at the end of a month which has showcased the domestic women’s game in the UK like never before.

In comparison to the Invincbles, the Brave have had their feet up, having qualified directly for the final as group-stage winners.

They dominated the group stage, winning seven of eight games, and beat the Invincibles comprehensively when the sides met on Monday – the Brave’s last fixture.

Their success has been built around a feared top order of Danni Wyatt, Smriti Mandhana and Sophia Dunkley – although India international Mandhana has now left the competition – and the skill of Anya Shrubsole, 20-year-old Lauren Bell and Amanda-Jade Wellington with the ball.

The Brave are also coached by England legend Charlotte Edwards who is looking to add the first Hundred title to her haul being the winning captain in the first Kia Super League and the first coach to win the Rachael Heyhoe Flint Trophy.

Birmingham Phoenix topped the group but the Brave have won six matches in a row since losing their opening two games, including a thumping win against Trent Rockets in Friday’s eliminator.

Phoenix captain and all-rounder Moeen Ali has returned from England duty to play while Liam Livingstone is one of the form batters in the country. He hit an incredible 92 not out from 40 balls with 10 sixes in his last innings on Tuesday.

The Brave have a formidable bowling attack, however. England internationals Chris Jordan, Craig Overton, Tymal Mills and Danny Briggs are joined by the spin of Jake Lintott.

“The way Livi [Livingstone] played in their last game showed how destructive he can be his wicket will be crucial early on,” Garton said.

“Mo has shown how good he is for a number of years. He is one of the best strikers in the world. We will have our plans and hopefully they come off.”

The Brave side will also feature their captain, England’s James Vince, and South Africa international Quinton de Kock. The Phoenix squad has a number of lesser-known names such as Will Smeed – an in-from, destructive opener and the youngest player in the men’s competition.

“You play franchise cricket to get through to finals,” Livingstone said.

“We have a lot of young lads and for them it is going to be their first final. It is all about enjoying the experience. These days don’t come around too often.”

What if the weather intervenes? 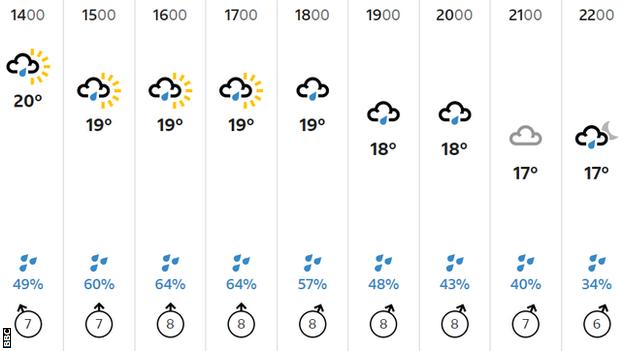 But one thing that could scupper the finale is the weather, with rain forecast for much of Saturday in London.

There is a reserve day in place (Sunday) but organisers want to achieve results on Saturday if possible, even if it means the games have to be shortened.

The shortest possible match is 25 balls per side.

Ideally, organisers also want to have finals of equal length, if possible, meaning they see two shortened games preferable to one wash-out and one 100-ball per side match.