London Spirit survived a big scare to beat Birmingham Phoenix and begin their women’s Hundred campaign with a three-wicket win at Edgbaston.

Spirit, captained by England skipper Heather Knight, were cruising at 108-3 – needing 21 from 23 balls in their chase of 129.

But in a frenetic few minutes they lost three wickets in four balls without scoring a run, as Emily Arlott dismissed Chloe Tryon and Susie Rowe and Deepti Sharma carelessly holed out for 28.

Spirit needed Amara Carr to edge them to victory with 11 not out before Danielle Gibson hit the only two balls she faced for four to seal the win with four balls to spare.

Despite defeat Phoenix’s Eve Jones was given the Match Hero award for her 47 in her side’s 128-6.

The match was the first doubler-header of The Hundred with the same two men’s teams playing from 18:30 BST.

The most important wicket in the women’s Hundred may well be that of Birmingham opener Shafali Verma – the 17-year-old India superstar who can win matches on her own.

She had just started to show her dynamic attacking skills with back-to-back fours when she was dismissed by Freya Davies for 13.

Davies, a tall fast bowler, deceived her with a looped slower ball that knocked over leg stump. It was the key moment in an impressive display from the 25-year-old.

Davies has played 17 times for England and has been tipped to break up the current Katherine Brunt-Anya Shrubsole opening bowling partnership in the not too distant future.

On this occasion she continued mix things up with slower balls, conceding only 19 runs in her 20 deliveries in addition to the scalp of Verma.

The 19-year-old, who is regarded as a star of the future because of her pure pace, buzzes around with her bleached blonde hair and appears to relish the limelight.

She screamed with delight and passionately punched the air after dismissing the dangerous Deandra Dottin lbw for nine – the first Spirit wicket to fall after 14 balls.

Following that, however, Wong was wayward, with her 20 balls costing 31 runs – the most of any bowler on either side.

With Spirit needing 16 from 15 balls soon after their collapse, Wong was handed the ball.

Her first delivery of the spell was brilliantly scooped over the wicketkeeper for four by Carr – a boundary that eased the tension for the visitors in a match which went to the wire.

The best batting effort in the match came from Eve Jones in a losing cause.

After the loss of Verma, Phoenix continued to slide and were 37-3 after 36 balls but Jones played an impressive attacking innings – hitting a number of dazzling shots back past the bowler.

She combined with her skipper, Amy Jones, in a key, well-paced partnership of 64 from 41 balls.

Amy Jones is an England international, who learned the game at Walmley Cricket Club just 10 miles from Edgbaston, but here she was outshone by her namesake. 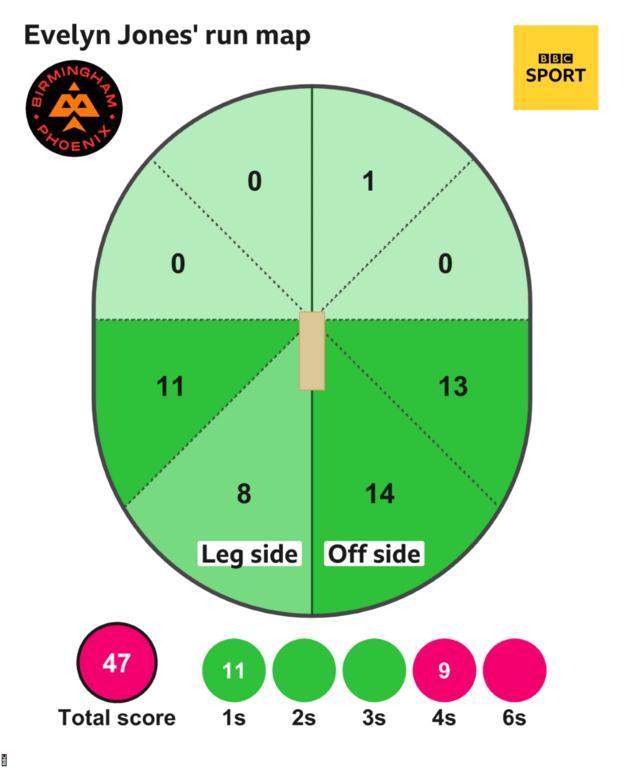