Oval Invincibles kept themselves in the hunt in The Hundred by holding their nerve to beat local rivals London Spirit by two wickets and go second in the men’s table.

The Invincibles were 52-4 chasing 147, their hopes of progressing fading, but a nerveless Laurie Evans steered his side to victory with five balls left.

In a tense finish, the hosts needed six from six balls with two wickets left but Evans launched a six into a jubilant crowd at The Kia Oval.

Evans, a local fan favourite, finished 67 not out from 37 balls, rescuing his side’s top order.

The Spirit, already eliminated from the competition, looked as if they could spoil the Invincibles’ chances at various points, including when England captain Eoin Morgan top scored with 41 in their 146-7.

Invincibles are now a point behind leaders Birmingham Phoenix in the table and level with third-placed Southern Brave, who they play in a huge game on Monday.

The top finishers go automatically through to the final, with second and third meeting in the eliminator. 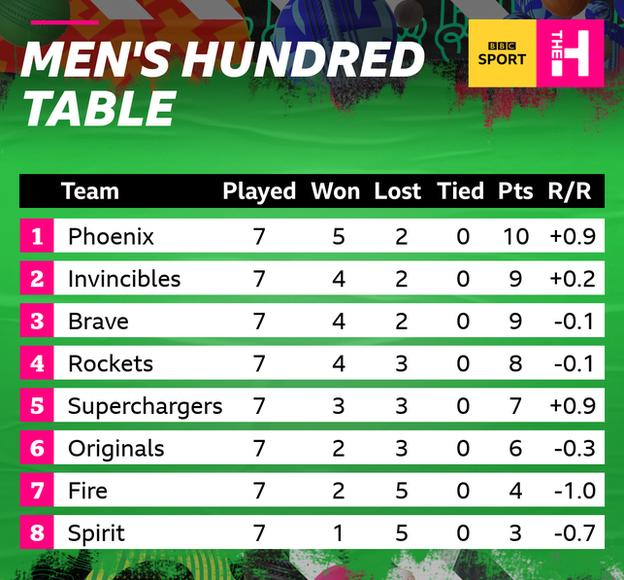 Local lad wins it at The Oval

“That is the innings of the Hundred. Absolutely magnificent.”

Those were the words of former England captain Michael Vaughan on BBC Two as Evans saluted the crowd while leaving the field. It has tough competition, but Evans’ knock is right up there.

What will make it even sweeter is Evans was born in Lambeth, just a short distance from The Oval. He is also a product of the academy at Surrey, the county side who play on the same ground and who he rejoined permanently last year.

Spirit skipper Morgan said it was the best he had seen the 33-year-old play.

“It was just so classy,” Spirit women’s captain Heather Knight added. “He targeted the short boundary and made sure he was the one shaking hands at the end.”

What is it about South Africa international spinners and their celebrations?

He took 3-25 – and after dismissing Josh Inglis, he whipped off his boot and mimicked dialling a number on the sole before holding it to his ear like a telephone.

The celebration came at the start of a fine bowling performance from Shamsi, who also saw off Morgan, plus Ravi Bopara for a golden duck.

He is particularly difficult to face because as a wrist spinner he can turn the ball in two directions, while his left-arm angle also adds a further headache for the batters.

His ball to dismiss Bopara was a perfect one that turned away from the right-hander and hit his off stump.

Not only was Bopara bowled by the very first ball he faced, the all-rounder also had an embarrassing moment in the field.

Still, it could have been worse…