Defence secretary Ben Wallace broke down live on air as he feared some people who helped the British effort in Afghanistan “would not get back”.

Wallace, a former soldier, laid the blame for the current turmoil firmly at the feet of former US president Donald Trump, who signed a deal with the Taliban to initiate the withdrawal of US troops by September.

The UK is currently in the process of evacuating British officials and diplomats as well as local Afghans, including translators, who helped the British war effort over the past 20 years.

But Wallace warned that “some people won’t get back”.

“We are only now in Afghanistan and have been for the last two weeks to process those people – we’re not… doing other diplomatic functions, we are simply there to process all those British passport holders and all those people we have an obligation to,” he told LBC.

“And you know, our men and women of our armed forces are risking their lives in doing that, but that is the right thing to do. They’ve risked their lives the last 20 years.

“At the very least, our obligation has to be as many of these people through the pipeline as possible, but I think I also said, it’s a deep part of regret for me, that some people get back – some people won’t get back, and we will have to do our best and third countries to process those people.”

Presenter Nick Ferrari asked: “Why do you feel it so personally, Mr Wallace?

Clearly emotional, he replied: “Because I’m a soldier… because it’s sad, and the west has done what it’s done and we have to do our very best to get people out and stand by our obligations.”

On Sunday night, the democratically elected president Ashraf Ghani fled Kabul, paving the way for the Taliban to take control of the capital city. The historic moment prompted thousands of desperate Afghans to descend on the airport in an attempt to flee the country and the impending Taliban rule. 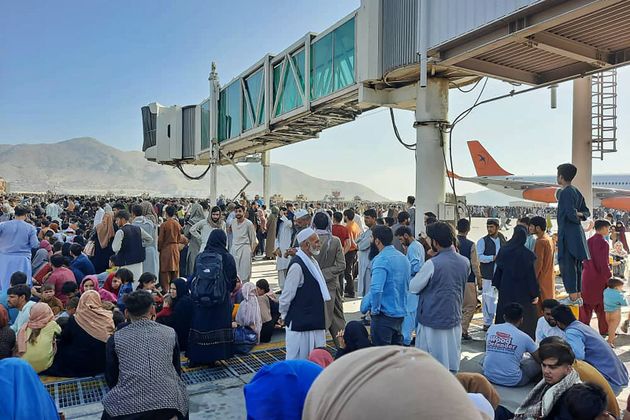 Afghans crowd at the tarmac of the Kabul airport to flee the country.

The chaotic scenes have sparked fierce criticism of former president Donald Trump for signing the deal with the Taliban, as well as current president Joe Biden for the way the withdrawal has been handled.

Wallace told BBC Breakfast: “The die was cast when the deal was done by Donald Trump if you want my observation.

“So I think in that sense, the seeds of what we’re seeing today were before president Biden took office.

“The seeds were a peace deal that was [effectively] rushed, that wasn’t done in collaboration properly with the international community and then a dividend taken out incredibly quickly.”

Following the scenes, Boris Johnson said he wanted to prevent Afghanistan “lapsing back into a breeding ground for terror”.

“I think it is very important that the west should work collectively to get over to that new government – be it by the Taliban or anybody else – that nobody wants Afghanistan once again to be a breeding ground for terror and we don’t think it is in the interests of the people of Afghanistan that it should lapse back into that pre-2001 status,” he said.

“What the UK will be doing is working with our partners in the UN Security, in Nato, to get that message over. We don’t want anybody to bilaterally recognise the Taliban.

“We want a united position among all the like-minded, as far as we can get one, so that we do whatever we can to prevent Afghanistan lapsing back into a breeding ground for terror.”

On Sunday night it was revealed that parliament would be be recalled on Wednesday to allow MPs to discuss the seriousness of the situation. Foreign secretary Dominic Raab scrambled back to the UK from his holiday abroad after a week’s silence – actions that drew criticism from both Labour and his Conservative colleagues.

The decision to recall parliament was branded too little too late for some.

Conservative chair of the defence select committee, Tobias Ellwood, said MPs should be recalled to vote “and be seen to vote on whether we abandon the Afghan people and allow a new haven for terrorism or seek to lead an [international] coalition”.

This morning he told Sky News the west should “hang its head in shame” over the unfolding crisis.

“The world is now a little bit more dangerous because they’ve now taken control of the country, and the west should really hang its head in shame after abruptly abandoning Afghanistan to a civil war after two decades of effort.

“This is not a good day for the west at all, and China will be observing things very, very closely indeed. They are already making alliances with the Taliban and glossing over the human rights atrocities that are likely to unfold.”