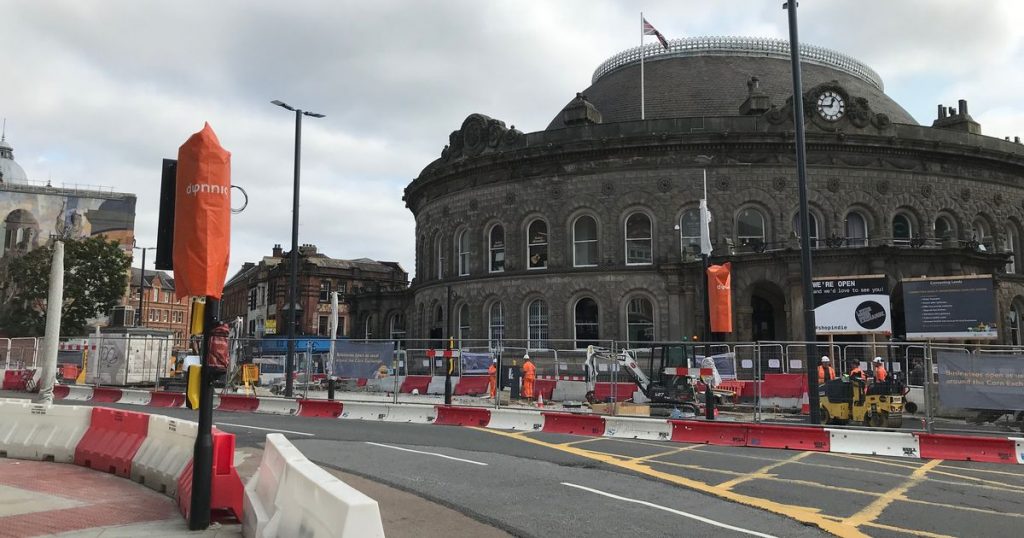 Roadworks to make improvements to Leeds city centre have been branded “a mess” as business owners speak out.

However, the works have been met with criticism from residents and businesses.

We went into the city centre on Wednesday to speak to businesses that have been affected by the works.

All the businesses agreed the work was necessary and would improve the centre but because of where the works have been placed, it has affected footfall.

John from Jim’s Place, in Call Lane, said: “I just think it’s shocking what they’re doing. The way they’ve handed it is out of order.

“Business is 60% down, I don’t know what else to say. We’ve asked them to do things like put signage up for us which they have done here but Corn Exchange has a big one, they say they couldn’t put (a big sign) one for us because it’s dangerous. It’s out of order.

“I think it’s horrible what they’ve done. They’re here until the end of March. It’s not good for business at all. They started after Covid doing this. I just think it’s shocking how it’s been handled but it’s all the way around Leeds.

“It should have been done a little at a time, not all at once. The way they’ve redirected traffic it’s going to be a matter of time before someone gets knocked. No one knows where to go or where to look, it’s shocking.”

Work on upper Call Lane is part of the Connecting Leeds highways work and Leeds’ £12.2m Grey to Green programme and it is set to be complete by spring 2022.

The closure will create an outdoor space, trees will be planted and lined in the street to create a green space, and more routes for cyclists.

A customer who popped into the shop as I was speaking to John added: “It’s a nightmare as a pedestrian but once they’ve finished it will come out nice but all at once everywhere.”

Megan and Loretta from Blue Rinse said: “It’s loud (the work) but I’m neutral because I think it will look nice. It’s for the benefit of everyone, it hasn’t affected business here but maybe other businesses.

“It’s an obvious building, I feel like students and stuff know we’re here. It’s not that bad to be fair. We just get on with it.”

A worker from Pagan Body Piercing said: “It’s a right mess, it’s affected business. They smashed our tiles, they haven’t apologised or replaced them.

“They should be working at night after the businesses have closed.

“People think that this section is closed (because of the fencing in front of the business.

“I’m not against the plans, I think it will be great, it’s just the time scale. Across the street, they did it quickly.”

She explained that the tiles were antique and can’t be replaced easily. Due to the damage, if there’s more footfall, they worry they will become loose.

Another section in the city centre that has been hugely affected is New Briggate where roadworks have been ongoing since May.

The work is expected to be completed in February 2022.

A worker from a shop in New Briggate who didn’t wish to be named or the shop said: “We’re very unhappy, I know we need the work, it’s good for us and the city centre but it’s affecting our business. There’s been a fall in footfall, there’s no walk-in trade, it’s really affecting us badly.”

Tauqeer from Dixy’s said: “I’m not complaining, it has an effect on the population (of people walking onto New Briggate).

“It’s going to take four months, we’ve got time, you either survive or don’t. We don’t know what to look forward to, to be honest.

Leeds City Council has been approached for a comment but a spokesperson hit back after being slammed for city’s roadworks misery.

A spokesperson from the authority said: “An incredible amount of detailed planning goes into coordinating all the infrastructure, improvements and utilities work across Leeds’ roads network to minimise disruption. While work progresses to secure the funding for the Dawson’s Corner junction improvements, other essential works needed to be completed in the meantime.”