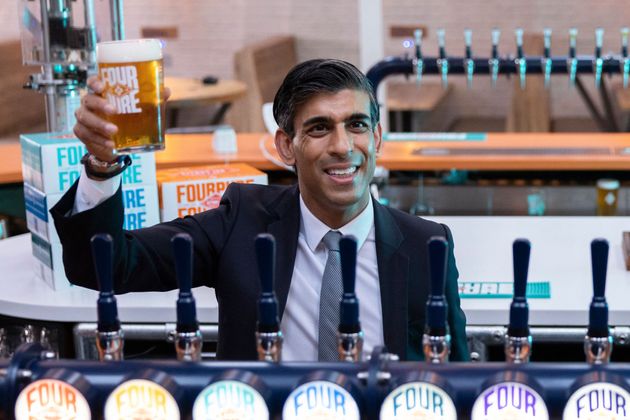 Sunak said the cut in air passenger duty would support regional airports across the UK.

Rishi Sunak has defended his decision to cut air passenger duty for domestic flights, saying they account for a “tiny part of our emissions”.

The chancellor has been criticised for effectively incentivising people to take flights within the UK just days before world leaders meet for the COP26 climate summit in Glasgow — tasked with finding a consensus on how leading nations can reduce their carbon footprint.

But Sunak doubled-down on the APD move, saying it was simply reinstating an old system whereby passengers did not pay the duty on both legs of a journey within the United Kingdom.

And he justified the cut by saying it would boost regional airports across the UK.

“Aviation in general only accounts for about 8% of our overall emissions, and of that 8% a fraction – just 4% or 5% – comes from domestic aviation, so it is a tiny part of our emissions,” he told BBC Breakfast.

“So, yes, we’re doing this to support domestic aviation, and regional airports will benefit from this, but we are also introducing a brand new band for ultra long-haul travel.

“Those who fly the furthest will pay the highest rates of APD, that’s consistent with our environmental objectives, that’s a new band that will come into force, and, actually, yesterday the independent watchdog said that our plans in the round will reduce carbon emission and move us further along the path to net zero.”

Sunak’s comments on domestic travel were immediately branded “astonishing” by his shadow Rachel Reeves, who said people should be encouraged to take trains instead.

She told BBC Radio 4’s Today programme Labour would not have chosen the cut.

“I find it astonishing that, the week before COP26, where we are supposed to be showing global leadership, we have cut air passenger duty on domestic flights.

“We should be encouraging people to use our train network for those journeys.”

Mike Childs, friends of the Earth’s head of policy, claimed the decision “flies in the face of the climate emergency”.

“As the prime minster prepares to host next week’s crucial climate summit, this retrograde step is another illustration that the government’s carbon reduction plans don’t add up,” he added.

During Wednesday’s Budget Sunak said people currently paid more for return flights within and between the four nations of the UK than they do when flying home from abroad.

He said that from 2023, airports in England, Scotland, Wales and Northern Ireland will be subject to a new lower rate of Air Passenger Duty.

“This will help the cost of living, with 9 million passengers seeing their duty cut by half. It will bring people together across the UK,” he said.

“Less than 5% of passengers will pay more, but those who fly furthest will pay the most,” he added.

However, seemingly absent from the strategy were suggestions that the public may have to change their lifestyles to help the environment — such as by eating less meat.

Sunak’s choice of venue for his morning media round — a meat market in Bury – was questioned by Sky’s Kay Burley, who asked: “Why are you in a meat market when we’re told to eat less meat to try and cut down on carbon emissions?”

Sunak replied: “I mean, I’m not telling anyone to eat less meat.”