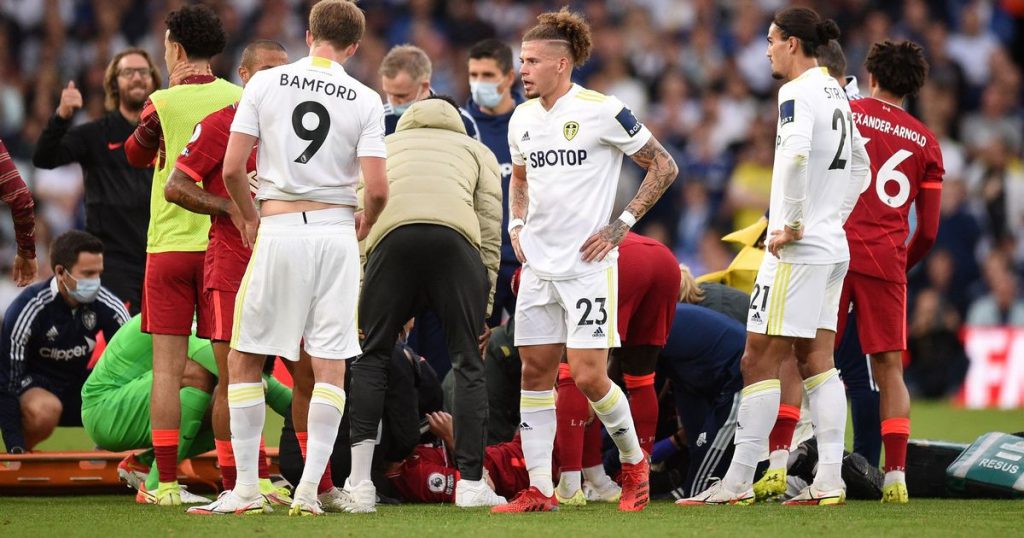 Leeds United may wish to appeal Craig Pawson’s decision to send Pascal Struijk off for his tackle that led to the unfortunate injury of Liverpool’s Harvey Elliott.

Clearly, the Whites defender meant no harm with his fairly innocuous challenge near the halfway line in the second half but it had grave repercussions for his opponent.

Liverpool‘s Elliott, who was immediately tended to by medical staff from both clubs, was eventually taken off on a stretcher before being taken to hospital. Although he has since been discharged, it has been confirmed that the 18-year-old midfielder will need surgery on his ankle that looked dislocated at the very least.

After some deliberation, and no doubt some guidance from Stockley Park, Pawson brandished a red card for Struijk who was clearly affected by the injury he had inadvertently caused. Understandably there were very few replays of the challenge on the television broadcast due to the severity of the resulting injury but it certainly seemed a harsh decision.

If Leeds do not choose to appeal the red card – with Marcelo Bielsa suggesting they will not appeal – then the Dutch defender will miss the next three league matches. His absence will be compounded by another injury for Diego Llorente, who limped out of the match in the first half, and leaves Marcelo Bielsa with a real selection dilemma in the backline.

With the Spaniard expected to be unavailable for the trip to Newcastle on Friday evening, the Whites may choose to launch a formal appeal to get Struijk’s suspension rescinded. We have taken a look at the rules behind the Premier League’s appeal process.

What are the rules?

An appeal can only be launched by a club whose player has been shown a straight red card which means that players sent off for receiving two yellow cards do not qualify for an appeal.

The club must file the appeal to the Football Association (FA) under the category of ‘wrongful dismissal’.

An independent regulatory commission at the FA then review the incident and decide whether the decision for the player to be sent off was the correct one.

In Struijk’s case, the panel must deem that he did not exhibit serious foul play in his tackle on Elliott.

Can an extra game be added to the ban?

Although it is unlikely to be a consideration if Leeds decide to appeal the decision, if the panel reject it and adjudge it to be a ‘frivolous appeal’ then an extra game will be added to the ban. That would mean Struijk would miss four matches instead of the three he currently faces.

An appeal can be rejected without the punishment of an extra game if it is considered that there was justification for an appeal.

When will a decision be made?

The club whose player has been sent off must file their appeal within two days of the incident occurring.

This means that Leeds will have to make a decision by Tuesday whether or not to attempt to get Struijk’s suspension overturned. If this is the case, then the panel’s judgement will be expected by Wednesday at the latest.

The speed of the process will be particularly important as the first game of the three-match ban takes place on Friday evening.