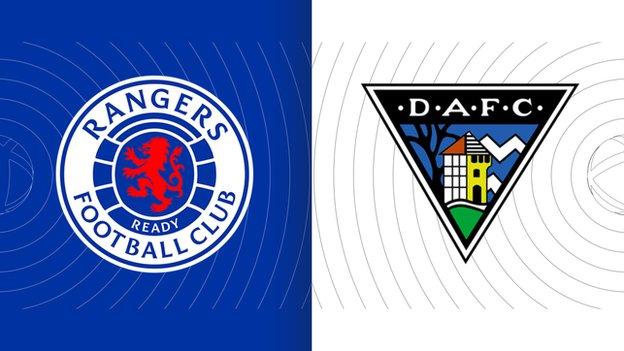 Rangers ended a run of three defeats by breezing past Dunfermline into the Scottish League Cup quarter-finals.

The Ibrox side, showing eight changes following the Champions League exit at the hands of Malmo, punished an early error when John Lundstram struck.

Roofe got another from the penalty spot in the second period, to the delight of the 41,500-strong home crowd.

The draw for the last eight takes place on Sunday.

After 2-1 defeats by Malmo sandwiched a 1-0 Premiership loss to Dundee United, Rangers were looking for a positive start and showed no mercy with their opener.

Former Ibrox midfielder Graham Dorrans’ wayward pass back to his defence was pounced upon by Calvin Bassey, who squared for Lundstram to smash in off the crossbar – his first Rangers goal.

Roofe headed at Deniz Mehmet as the hosts dominated and the second goal was not long in coming with Hagi’s pass sending Wright clear and the Scot cutting inside Aaron Comrie before beating Mehmet with ease.

Bassey added another assist with a pinpoint cross on to the head of Hagi and only a stunning Mehmet save denied Nathan Patterson moments later.

Glen Kamara and Joe Aribo were involved in the build-up for Roofe’s goal, with Aribo’s back-heel flick taken superbly by the striker as he lashed home his second goal of the season.

One shaft of light came Dunfermline’s way when Connor Goldson completely missed a cross and needed the help of goalkeeper Jon McLaughlin to bail him out with a save to deny Craig Wighton.

Intricate passing involving Aribo led to the penalty incident with Roofe fouled by Dorrans. The striker then dusted himself down to confidently slot away from 12 yards to cap a five-star performance from the hosts.

Man of the match – Calvin Bassey

What did they say?

Rangers assistant manager Gary McAllister told Premier Sports: “We started the game ever so well. We looked nice and sharp in front of goal.

“It’s been a tough week. We scored an early goal, which helps. We looked exciting. We’ve got a heavy schedule. Every player’s so key.”

Dunfermline manager Peter Grant: “We never got started, it continued on, it was really tentative. People say Rangers played well but we were way off the mark, we were just so poor.

“I hope the players are hurting, I hope they’re suffering, but they’ve got to learn from it.”

Dunfermline return to Championship action next Friday against Raith Rovers (19:45), with the match live on BBC Scotland.