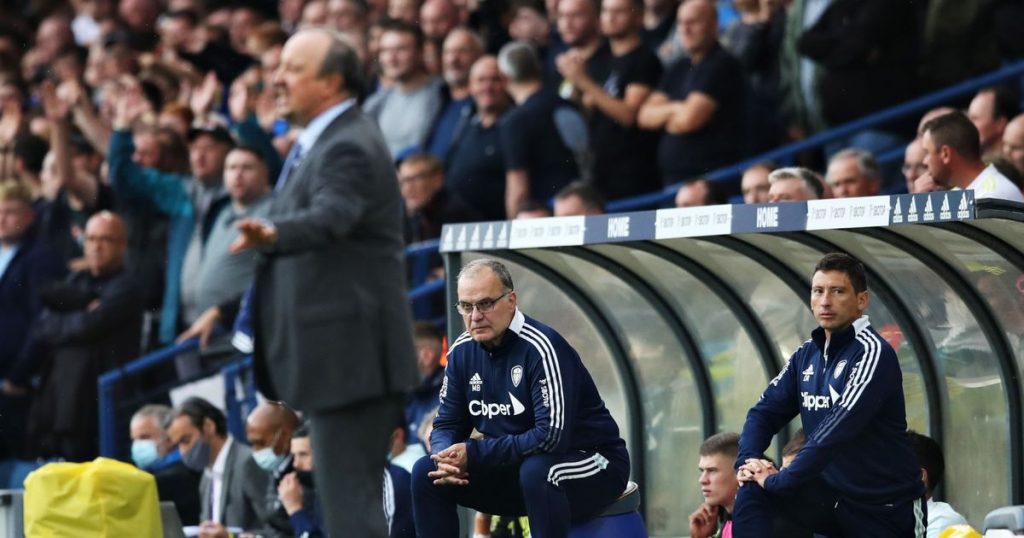 Long after the broadcast crews and assorted media had packed up and left for home, almost half an hour since Elland Road had emptied following a lap of honour, Marcelo Bielsa remained on the touchline at Elland Road – just chatting.

The rain had not relented throughout the day and it continued to bucket down as half-past five came and went.

Still though, Bielsa and Everton boss Rafa Benitez stood at the mouth of the tunnel, discussing the game, comparing notes and sharing a deep mutual respect.

The new Everton manager is as decorated as they come: Champions Leagues, major domestic titles and a place among UEFA’s coaching elite.

He has managed Real Madrid, Inter Milan, Liverpool, Chelsea and Napoli in his distinguished career.

Five years his senior, the closest Bielsa has come to major honours in Europe is appearances in Copa del Rey and Europa League finals.

His Championship triumph with Leeds United in July 2020 is his solitary winner’s medal in decades of coaching across Europe.

Bielsa does have accolades to his name from his time in South America, both as a domestic and international manager but success across the Atlantic Ocean has always eluded him.

Viewed through the narrow lens of trophies won, the pair are not in the same league.

As they concluded their post-match interviews on the near touchline yesterday following the 2-2 draw between Leeds and Everton, the two shared a moment, much like old friends.

It was the first time Bielsa and Benitez had faced off against each other. Despite managing across Europe, their tenures had never overlapped so as to pit one against the other.

As Bielsa made his way back inside, Benitez – surrounded by his press officer and other Everton staff members – broke from his circle and made pains to summon Bielsa.

It is safe to assume he did so out of a recognition for Bielsa’s standing in coaching, demonstrating the mutual respect opposition managers have for the Argentine.

A meeting of minds, the duo strolled towards the tunnel, Bielsa’s arm over Benitez’s shoulder.

For a further ten minutes or so, the pair chatted, no doubt discussing the game – which was later confirmed by Benitez in his post-match press conference.

Prior to Saturday’s two-all draw, Benitez had spoken about Bielsa in glowing terms, reiterating the professional recognition of his achievements in football.

“Obviously I know him [Bielsa] because I had players at Valencia who played for the Argentina national team,” he said. “When I was in Italy, he was there. I know him, I have some friends that know him, and I’ve seen his team – that’s the most important thing.

“His team is very intense. He is someone who analyses the game every day… he is doing well with Leeds so he’s doing a great job.”

It is not uncommon to hear such platitudes about opposition managers before a Premier League fixture, but Benitez’s insistence to catch Bielsa for a discussion after the final whistle suggested he was genuine in his pre-match praise.

After the contest, the two men finally made their way inside to speak to the assembled written press.

LeedsLive reporter Beren Cross then asked the Everton manager what he had been discussing with Bielsa for so long.

“I was just talking about the game and the chances that we had, and how the team was working hard obviously,” the Everton boss admitted.

Not wishing to betray the private nature of his conversation with a managerial heavyweight, Benitez was rather brief in his response.

Nevertheless, his summoning of Bielsa and the subsequent discussion amid an Elland Road deluge showed better than any press conference revelation could, just how much admiration there was between two well-respected gentlemen of the game.