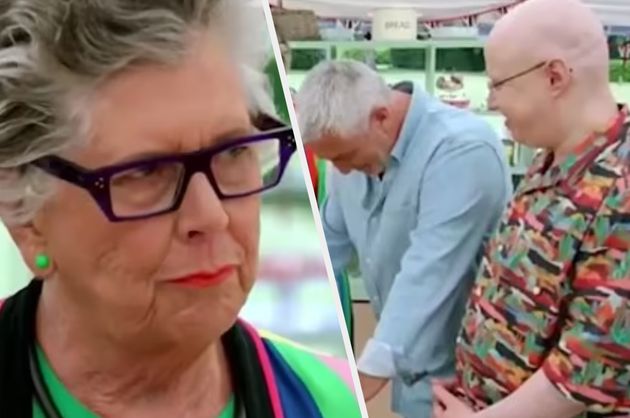 Prue Leith had her co-star Paul Hollywood doubled over with laughter after serving up a whopper of a double entendre during the latest episode of The Great British Bake Off.

The show has a long history with innuendos, but Prue entered the Hall Of Fame as the remaining contestants tackled Pastry Week on Tuesday night.

Prue was stood with Paul and host Matt Lucas judging baker George’s chouxnuts when she said: “Quite often I need two holes so that I can squirt.”

But she didn’t stop there.

“You squeeze the bag, when you meet that little bit of resistance… it usually means it’s full,” she continued.

Paul and Matt could not contain their laughter any more, with Prue’s fellow judge seen propping himself up on the workbench.

“Why are you laughing?” Prue asked.

“We’re just children!” Matt said, before Prue told them to “stop this nonsense”.

However, Paul struggled to compose himself as he tried to give his verdict on George’s chouxnuts.

But the innuendos did not end there during Tuesday night’s show.

There was chatter of “George’s giant sausage” being “rock hard” as the bakers made a terrine pie for their Showstopper, and compliments about contestants’ “finger action”.

Matt also had an unfortunate misunderstanding with baker Giuseppe, when he thought he’d called filo pastry a “massive arsehole”.

What he actually said? A “massive hassle”, obviously.

The Great British Bake Off continues on Tuesday at 8pm on Channel 4.