Alan Shearer joins Gary Lineker and Ian Wright for Match of the Day this Saturday at 22:20 BST on BBC One and the BBC Sport website for highlights of seven Premier League games.

Joining Manchester City would be a brilliant move for Harry Kane, but if it happens I don’t think it means the Premier League title race is all over.

It’s not going to be as straightforward as that for City, especially with Chelsea signing Romelu Lukaku.

Chelsea had everything apart from a goalscorer last season and there were too many times where they created chances and didn’t put the ball in the back of the net.

Lukaku changes that because we know he will score goals. He guarantees lots of them actually, which is why they have gone all out to get him and were willing to spend so much to bring him back to Stamford Bridge.

He is going to be a huge signing for them. Put it this way, he can be the difference between them being champions or not. That’s how important he is.

We are talking about one of the best strikers in the world – that’s how good Lukaku is. At 28, he is at his peak and I think he has improved a lot since he left Manchester United for Inter Milan in 2019 because of the experience he has had in Serie A.

He is a better all-round player now, plus he is hungry and has got something to prove at Chelsea after he was allowed to leave when he was younger.

Lukaku is arriving at a club that has everything else in place to win the title, although there are a few sides who will have something to say about that.

Four teams have a chance of being champions

It’s been a short break from football for everyone this summer but after such an enjoyable Euros I can’t wait for the Premier League to get started again.

There is plenty to look forward to in the coming season, including seeing some of the major signings that have already happened – and there are more to come. 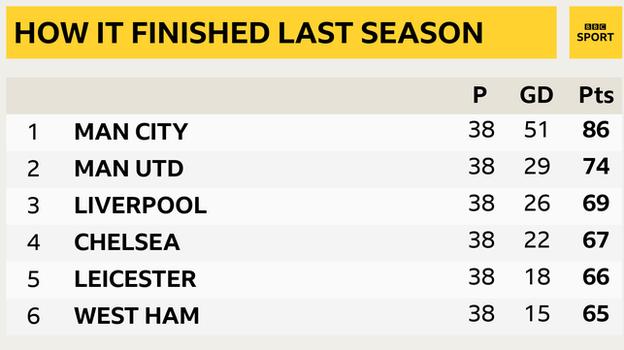 I’m expecting it to be much tighter at the top than last time, with four teams in with a chance of being champions, not just City and Chelsea. I’m only going with Thomas Tuchel’s side to win it because they got Lukaku in.

Manchester United lacked consistency last season but have probably had the best transfer window so far, bringing in France defender Raphael Varane and Jadon Sancho, who is a really exciting talent. They might even get someone else in too.

Liverpool have only brought in RB Leipzig centre-half Ibrahima Konate this summer, but after all their problems at the back in the past few months they are well covered in that area now. It was a complete freak they had so many injuries in that one department anyway.

I don’t have any worries for them up front because you know Mohamed Salah and Sadio Mane will get them goals when the team is set up properly.

The one area they might have to look at before the window shuts is midfield because they have lost Georginio Wijnaldum to Paris St-Germain, but I have no doubt they are going to do much better than last year, when so many things went wrong for them.

As the defending champions, City are the team to beat and they have already strengthened by bringing in Jack Grealish from Aston Villa.

At £100m and a new British transfer record, Grealish has cost them a lot of money but he will only enhance Pep Guardiola’s team.

I do wonder, though, if they might have to sacrifice someone from their squad because they have got him in. Bernardo Silva appears to be the midfielder most likely to make way and, if Kane comes too, it might mean another first-team player leaving.

We are all waiting to see what happens next with Kane. It’s clear he wants to leave Tottenham but right now we don’t know whether Spurs are even willing to negotiate, or if City will pay the asking price if he is for sale.

I can see why Kane would want to go to City, though, because he has made it clear he wants to win trophies. He would have a huge opportunity to do that at the Etihad.

As well as winning things, he would score even more goals than he has managed for Spurs. If you think about the creative players he would be playing alongside at City, it is mouth-watering for any striker to think about the number of chances they would get.

It’s a move that also makes perfect sense for City. I know they played without a recognised striker in many games last season and still won the league, but it would be strange if they went into September with just Gabriel Jesus as their only senior centre-forward.

They want Kane, but Spurs know that too, which is why they are holding out.

Keeping Kane would obviously be a big positive for them, because I don’t think he would sulk and let his performance levels drop if he had to stay. He will always put the performances in.

Even so, looking at the situation now I’d be very surprised if he is still a Tottenham player come the end of the transfer window.

Why Vardy is the key to Leicester’s hopes

I don’t see anyone else being title contenders but Leicester have to be in the conversation when we talk about the top four.

They have come so close in the past two campaigns, dropping out late on and finishing fifth each time, but on top of that they are the FA Cup holders and have beaten Manchester City already this season in the Community Shield.

Losing defender Wesley Fofana in pre-season to a serious injury is a big blow, but I still think they will be in and around the Champions League places again.

To actually make it this time is still a big ask however. For starters, they will need one of the four teams I have talked about to have a poor season and leave the door open for them.

They will also need Jamie Vardy to keep scoring too. He turns 35 in January and the question is not only if Vardy can stay injury free, but also whether he has one or even two more seasons left in him in the top flight.

The older you get, the more difficult it is to make an impact – I know that myself – but I think he has got plenty left to offer, which is why the Foxes won’t be far away.