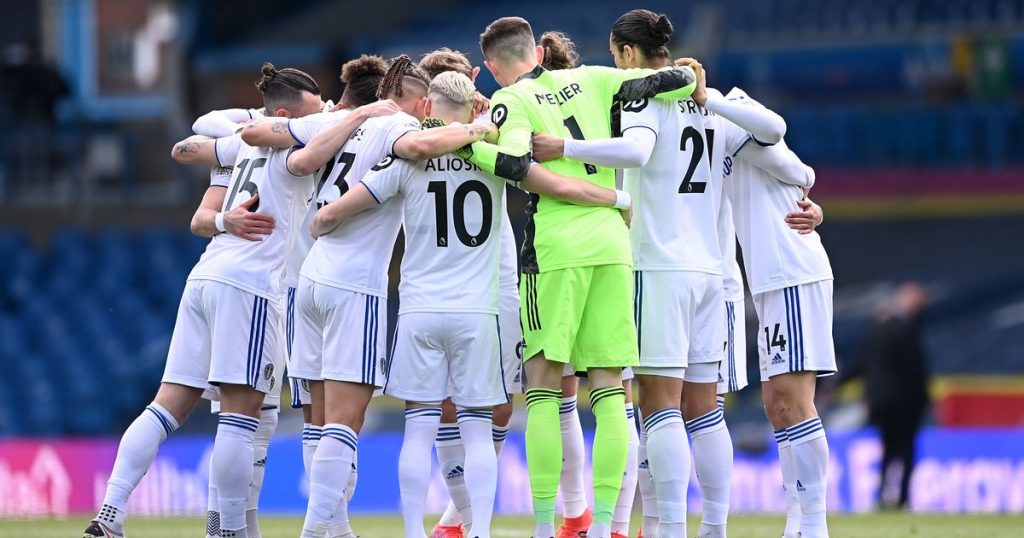 With Euro 2020 in the books, Leeds United fans are turning their attention to the start of the 2021-22 Premier League season.

The fixture list has thrown up a mouthwatering start at Old Trafford, with Leeds being handed an instant chance to avenge last season’s 6-2 defeat across the Pennines.

Following an impressive ninth-placed finish in on their return to the top-flight campaign for the first time in 16 years in the 2020-21 season, Marcelo Bielsa will be looking to build upon this as the Whites target European football.

With only four weeks until the new campaign commences and plenty of twists and turns left in the summer transfer window, we take a look at predicted starting XI’s – including any potential new recruits – for both sides ahead of the encounter at Old Trafford on August 14th.

Despite rumours linking the French stopper with a move to PSG, Meslier will start the season as the number one for Marcelo Bielsa and will face a tough test, potentially against the likes of Edinson Cavani, Bruno Fernandes, Jadon Sancho and Mason Greenwood on the opening day of the campaign

The evergreen Ayling, who has been exceptional for Bielsa since the Argentine’s arrival in 2018, is expected to start on the right of a back four. Likely to be directly against new Red Devils signing Jadon Sancho, the former Bristol City man will have to be at his best to nullify the threat of the ex-Dortmund star.

After overcoming early injury problems following his move from Real Sociedad last summer, the Spain defender will be competing with the likes of Robin Koch and Pascal Struik for a spot alongside captain Stuart Cooper at centre-back.

Given his experience, Bielsa may look to the more experienced Spaniard to handle the wily Cavani at Old Trafford.

The captain will be tasked with marshalling Bielsa’s defence and keeping the likes of keeping the Red Devils attacking threats quiet.

Following Scotland’s group stage exit at Euro 2020, Cooper will undoubtedly be a key man within the Whites rearguard in the 2021/22 campaign.

The new acquisition and former Barcelona man will likely fit straight into the starting lineup at Old Trafford as he begins his career at the Whites.

Potentially facing highly rated Mason Greenwood, the man tasked with replacing Ezgjan Alioski will have to maintain his concentration defensively, while also looking to provide a real attacking outlet on the left flank.

Following a sensational tournament for England at Euro 2020 this summer, where he became a key cog in Gareth Southgate’s side as they reached the final, Phillips will be looking to carry on his excellent form for his club side ahead of the Whites second season under Bielsa in the Premier League.

Lining up against the likes of Paul Pogba and Bruno Fernandes, Phillips has proved he is more than capable of competing against the best midfielders on the planet this summer and once again will be a key component of Bielsa’s side this season.

Phillips will not be able to enjoy a long break this summer – but there is no doubt he will be champing at the bit to be involved against Leeds’ biggest rivals.

Looking to build upon an excellent debut season at Elland Road and within the Premier League following his arrival from Rennes last summer, the Brazilian has become a key attacking weapon for the Whites.

Raphinha will be looking to create havoc amongst the home side’s defence as the Whites side look to cause an upset against last season’s Premier League runners-up.

We know that Leeds have a central midfielder on their summer shopping list, but Stuart Dallas’ brilliant end to the 2020-21 season in midfield means it is increasingly difficult to see anyone else in that role.

Junior Firpo’s arrival means that the Northern Irishman should not be required at left-back, meaning that Dallas’ energy, ability to read the game and desire can again be utilised in the middle of the pitch.

Leeds fans will be hoping that Rodrigo’s late-season surge over the final month of the last campaign was a sign of things to come.

The club-record signing netted four times in Leeds’ last four games, with a goal coming every 41 minutes. His first season at Leeds was held back by nagging injuries and a bout of Covid-19, but with a full pre-season under his belt, supporters can expect big things from the Spain international this season.

Harrison sealed a permanent move to the Whites this summer following three successive seasons on loan at Elland Road and will be looking to maintain his impressive form ahead of the upcoming campaign.

After scoring in the 4-3 defeat to Liverpool on the opening day of the season last campaign, Harrison will be looking to repeat the trick against Manchester United and will be aiming to become a key man for Bielsa this year.

With an excellent return of 17 goals in the top flight last season and with Harry Kane being the only Englishman to outscore the Leeds forward, Bamford will be looking to hit the ground running at Old Trafford this campaign.

Facing Man United and England defensive lynchpin Harry Maguire and potential new signing Raphael Varane, Bamford will face a stern test but will fancy his chances of opening his account of the new season at Old Trafford.

How would you like to see Leeds line up at Old Trafford? Let us know in the comments below

With Ole Gunnar Solskjaer favouring the England keeper domestically towards the back of the last campaign, Henderson could continue to keep David De Gea out of the Manchester United starting XI and may have to prevent the likes of Bamford, Raphinha and Harrison from scoring.

Said to be keen on a move to Old Trafford following winning La Liga last year at Atletico Madrid, Trippier would be in competition with Aaron Wan-Bissaka for a place within Solskjaer side this season and could get the nod to start against Leeds in the Red Devils’ opening fixture of the upcoming campaign.

Heavily linked a move to the Reds and the Premier League, the four-time Champions League and World Cup winner could be the perfect defensive partner to Harry Maguire and could face an intriguing battle against Leeds frontman Patrick Bamford as he begins his United and Premier League career.

Following a superb summer with England at Euro 2020, coming back into the team after missing the opening two fixtures through injury, Old Trafford fans will be looking to their captain to lead his side to some elusive silverware this year.

Another player who enjoyed an excellent summer with England at Euro 2020, including scoring the in final, Shaw was one of the Peemier League’s best left-backs last season and will be looking to carry on his excellent form ahead of the upcoming campaign.

After a disappointing tournament with Portugal at Euro 2020, the Portuguese talisman will be looking to carry on his excellent form and goalscoring exploits for the Red Devils this year, starting against Marcelo Bielsa’s side on August 14.

With Solskjaer recently outlining his desire to switch from a 4-2-3-1 to 4-3-3 system, the Norweigan may opt to chose Fred as the solitary defensive midfielder over the more offensive-minded Scott McTominay in the Red Devils opening fixture of the campaign.

With doubt still surrounding the Frenchman’s future at Old Trafford, with only a year left on his contract, Pogba is likely to start against the Whites at Old Trafford on August 14, facing the likes of Phillips and Dallas in the midfield battle.

After a mixed campaign last season, the highly promising England forward will be looking to become a key man and attacking weapon for Solskjaer, likely to directly face new signing Junior Firpo on the right-hand side of Manchester United’s attack in the opening fixture at Old Trafford.

Following an excellent debut campaign at Old Trafford and last season following his move from PSG, the Uruguayan delighted many United fans when he signed a new contract extension this summer and will be looking to pose Liam Cooper and Diego Llorente all sorts of the problem in the curtain-raiser of the season.

After suffering heartbreak for England this summer, missing his penalty for Gareth Southgate’s side in the shootout against Italy in the final of Euro 2020 at Wembley, Sancho will be looking to be put his national disappointment behind him after finally securing his move to Old Trafford from Dortmund this summer.

With Marcus Rashford expected to miss the first two months of the season following his upcoming surgery on a long-term shoulder issue, Sancho is expected to start the season on the left flank of Manchester United’s attack and will be looking for the perfect debut against bitter rivals Leeds as he begins his career at Old Trafford.