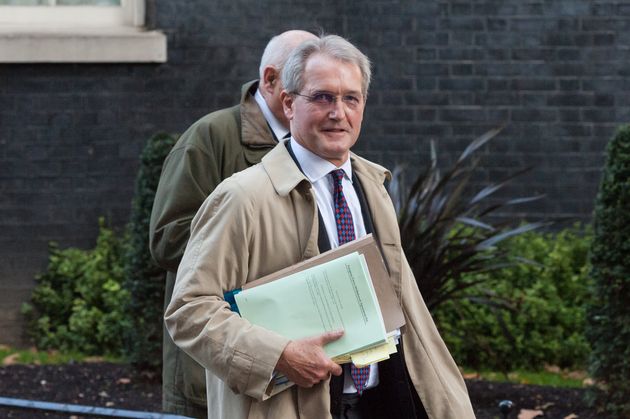 While some fellow Tories are pushing for him to remain in Parliament, the opposition want him to be suspended for 30 days. All MPs will vote on his potential suspension on Wednesday.

Why is Paterson in the news?

The Commons Standards Committee has recommended Paterson should be suspended for an “egregious” breach of the parliamentary rules.

The MPs’ watchdog claims Paterson used his role as an MP to assist two companies which paid him more than £100,000 a year as a consultant.

If backed in the parliamentary vote on Wednesday, the 30-day suspension would automatically trigger a recall petition. This could lead to a by-election if a tenth of his constituents signed it, meaning Paterson’s seat may be up for grabs.

The Tory MP has rejected the inquiry altogether and claimed it was not conducted fairly.

He also alleged that he abided by the rules of Parliament during his supposed lobbying because he was just pointing out defects in safety regulations to other ministers, but his criticisms of the investigation were rejected by the committee.

Why is his personal life involved?

Patterson claims the investigation process from the watchdog was a “major contributory factor” into his wife Rose’s death in 2020. She died by suicide.

Yet the cross-party committee said it took the circumstances of his wife’s death into account.

Who is supporting him?

Fellow Tory Andrea Leadsom is leading the charge to overturn the suspension.

She and Paterson’s other supporters wants to set up a new committee to change the process for investigating MPs.

They intend to establish a permanent panel led by someone outside of Parliament which allows MPs to bring their own witnesses.

This amendment to the MPs’ watchdog will be voted on in the Commons today – and some other Tories have already announced that they will be backing it.

I plan to vote for amendment (a) today.
17 witnesses were denied a voice and one person was Judge and Jury.
Guilty or not, the process is just plain wrong.
Justice has to be seen to be done.
For once, John Bercow and I agree on that.
(And he appointed the Commissioner!) https://t.co/K9gpwEI3lI

Why is this becoming a controversy?

Labour’s Jess Philips said the Tories’ attempts to remove the suspension show there was “not a scrap of morality or principle” among the party’s backbenchers.

Other Labour MPs say the plan to save Paterson is a return to “90s sleaze culture”.

Changing the MPs’ watchdog has also been described as an “attempt to kill the system of standards in public life”.

Even Tory Sir Bernard Jenkin, who is backing the amendment, told BBC Radio 4′s Today programme that the timing of this change to the watchdog “looks terrible”.

What we’re seeing today is an attempt to kill the system of standards in public life. Nothing less.

What is Paterson known for in Parliament?

Paterson was first elected as a Tory MP for North Shropshire back in 1997. As of the most recent 2019 general election, he had a majority of almost 23,000 votes over his local opponents.

Paterson was in the shadow cabinet with a variety of roles, but he became a more prominent figure once the coalition government was formed in 2010 and he was appointed as Northern Ireland secretary. He went on to become the environment, food and rural affairs secretary in 2012, resigning in 2014.

He also backed the Vote Leave campaign in the run-up to the 2016 EU referendum and is a member of pro-Brexit European Research Group.

He was the first cabinet member to publicly voice his opposition to the same sex marriage bill, defying the-then prime minister and the leader of his party David Cameron back in 2012.

He has been considered a climate change sceptic as well, once describing wind turbines as “ridiculous” and supporting fracking. He later raised eyebrows by listing the benefits to climate change, including fewer deaths caused by cold winters, at a previous Tory conference.

He also cut funding for adapting to climate change by 40% during his time as environment secretary.