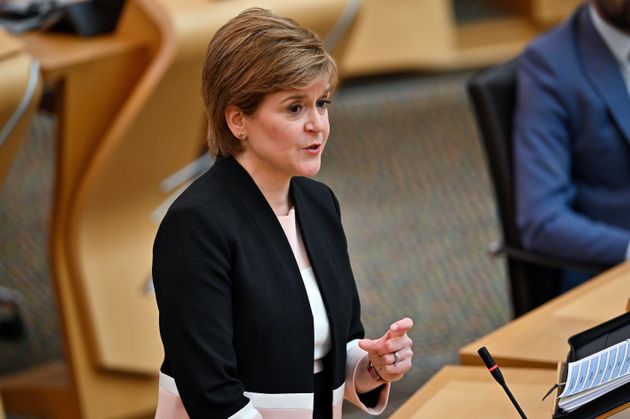 Almost all Covid restrictions in Scotland – apart from face mask wearing – will be scrapped from August 9, Nicola Sturgeon has announced.

The first minister said that the country would join England from next Monday in removing the remaining legal curbs on physical distancing, nightclubs and large crowds at events.

Scotland will move faster than England in allowing double-jabbed people to avoid home isolation when identified as a close contact of someone with Covid.

But the continued use of face masks in shops, on transport and other confined places is the biggest difference with rules south of the border.

“We will keep this under review, but my expectation is the face coverings are likely to be mandated in the law, for some time to come,” Sturgeon said.

Schools will still be required to use face masks too, although ‘whole class’ isolation will be scrapped.

The whole of Scotland had been in “level zero” of its government’s virus alert system, but key restrictions had been kept in place even after Boris Johnson went ahead with “freedom day” on July 19 south of the border.

The Scottish parliament was recalled from its summer recess to hear Sturgeon announce her cabinet’s latest decisions.

Sturgeon announced that Scotland’s “Test and Protect” service will continue, while homeworking will also still be advised by the Scottish government.

“I know most businesses are not planning a wholesale return to the office, while recognising that a return for some staff will be beneficial to them and their employers. It is vital that this gradual approach continues,” she said.

“We will also encourage employers to consider for the longer term, as the Scottish Government is doing, a hybrid model of home and office working – which may, of course, have benefits beyond the need to control a virus.”

The Scottish government will also require schools to have access to CO2 monitors to ensure appropriate ventilation, backed by £10 million of investment.

Under Scotland’s “level zero” nightclubs were not allowed to open, face coverings were still required in shops and on public transport, and indoor social distancing is reduced to one metre in public places.

The first minister revealed she was developing a possible Covid passport app for domestic use in Scotland, but stressed “we do not underestimate the ethical, equity and human rights issues”.

In a message to the Scottish people, she said: “Enjoy being able to do more and more. We’ve all waited a long time for that, but please protect yourself as you do so, principally through vaccination and continue to take the greatest of care. If we all do that we will increase our chances of keeping the virus under control.”

Scottish Tory leader Douglas Ross welcomed the changes but warned the retention of face masks was not justified.

“These ongoing restrictions will hold Scotland’s recovery back,” he said. He said that the public were “losing patience with these last minute extensions and limitations on their rights without full justification”.