Chris Hipkins has become an overnight sensation after accidentally encouraging the public to “spread their legs” when talking to the press on Monday.

New Zealand’s Covid response minister began by saying: “It is a challenge in higher density areas for people to get outside and spread their legs when they’re surrounded by other people…”

He was supposed to be urging the public to socially distance when outside due to the resurgence of Covid cases in the country.

But even his colleague Dr Bloomfield, who was standing next to Hipkins by the podium, could not hide his smirk.

The MP himself was clearly aware of his blunder, and later clarified: “Right, I’m going to stretch my legs. I’m sure you’ll all have fun with me later.” 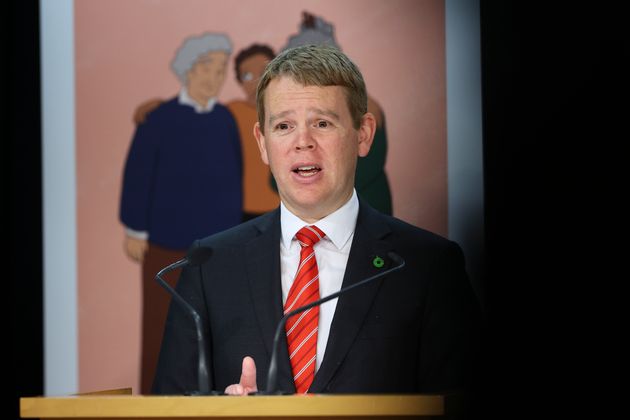 Minister for COVID-19 Response Chris Hipkins speaks to media during a press conference at Parliament on July 14, 2021

He was right – despite the severity of the briefing, his x-rated blunder ended up dominating headlines.

The New Zealand Herald﻿ revealed that just hours after his very public blunder, Hipkins had inspired a wave of themed merchandise.

The hashtag #spreadyourlegs started online, as many called on their fellow New Zealanders to “spread your legs and save lives”.

Others pointed out how the new phrase went perfectly with the government’s pandemic phrase, “go hard, go early”.

The slip-up provided some light relief for the country, which has just been hit by an outbreak of the Delta variant and is now in a national level 4 lockdown.

Hipkins acknowledged the blunder himself on Facebook a few hours later, posting a photo with the caption: “That moment when you realise that what you had intended to say and what you had actually just said weren’t the same.”

Hipkins added: “At least I’ve given you all something to laugh about.”

New Zealand has been internationally praised for its response to the pandemic, and until recently had been one of the few nations in the world to report zero Covid cases.