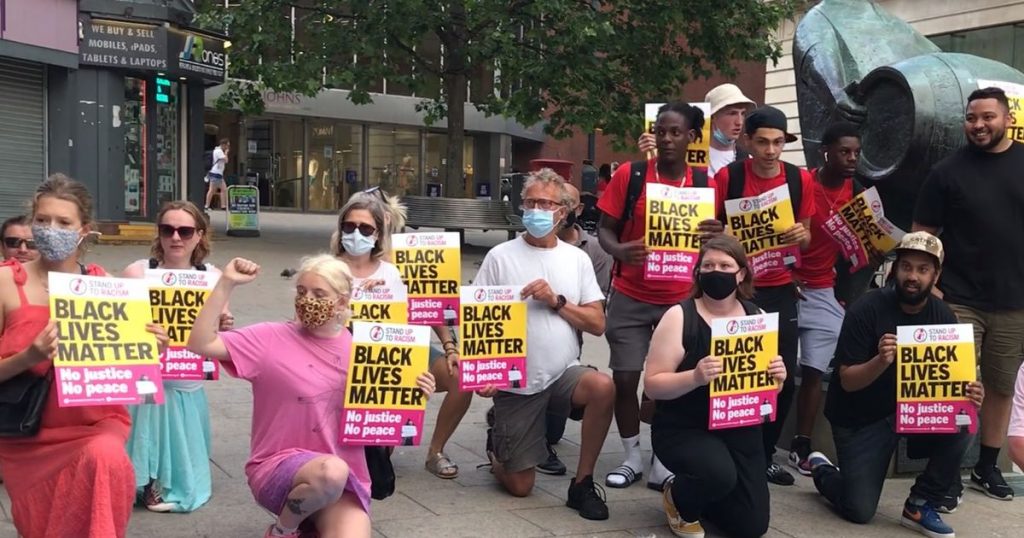 A peaceful anti-racism protest in solidarity with the England football players who were racially abused following the Euro 2020 final was rudely interrupted this afternoon.

Stand Up To Racism Leeds held a demonstration in Dortmund Square in the city centre, and took the knee, chanting “no to racism” and “anti-racism will win”.

But one man passing the protest stopped to accuse the group of ‘disrupting people’s lives’ and said it was only ‘upper class’ people that protest, as can be seen in the video above.

READ MORE: Leeds family’s anger as they land in Majorca for holiday hours before it joins amber list

After the group told him to mind his own business and continued their chanting, he walked away but continued to harass them from a distance.

The group said they arranged the protest to “call out the hypocrite Boris Johnson.”

Mr Johnson has been slammed for not criticising England fans who were booing the team for taking the knee in protest against racial injustice.

American footballer Colin Kaepernick took the knee during the national anthem before a match in 2016. He said he could not stand to show pride in the flag of a country that oppressed black people, although the gesture has been documented for decades before during race campaigns.

The anti-racist statement has since become a prominent symbol in sport and during protests.

It has been a feature of Black Lives Matter protests, including those following the murder of George Floyd.

England players continued to take a knee at Euro 2020 to highlight racial inequality and discrimination.

England manager Gareth Southgate said his players decided to continue during Euro 2020 and said they felt “more determined than ever”.