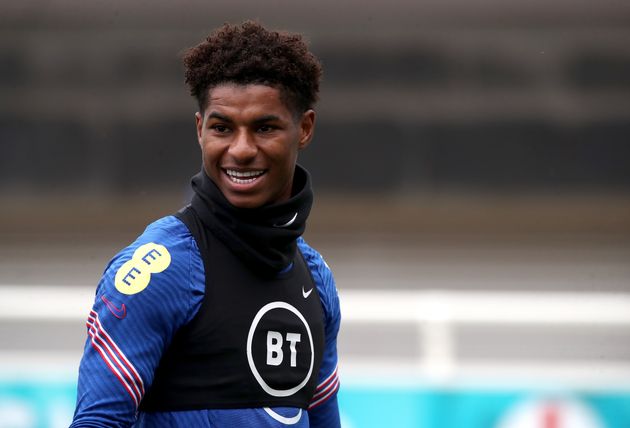 Marcus Rashford has kickstarted a drive to get more disadvantaged families signed up to a food voucher scheme – prompting calls from Labour that the footballer is having to “do the government’s work for them”.

The England and Manchester United striker urged health professional to help get more children signed up to the government’s healthy start food voucher scheme after it emerged that 40% of those eligible were still not registered.

In an open letter published in the British Medical Journal, Rashford said he was worried that after an initial good start last year, numbers were now “plateauing”.

“Since November 2020, members of the child food poverty taskforce have used their channels and platforms to communicate about the healthy start scheme and to tell people how to access it, with the hope that we will be able to reach the majority of those most in need,” he said.

“While we have seen 57,000 more parents benefit from the scheme as a result, I’m concerned we are plateauing.

“More than 40% of those eligible for the vouchers are still not registered for the scheme, and I’m confident that the majority of these parents can be found in communities just like mine, where I grew up — no internet, no high street, no word of mouth.”

Labour’s shadow child poverty secretary Wes Streeting accused the government of having “no strategy for lifting children out of poverty”, adding: “Once again we see Marcus Rashford having to do the government’s work for them.”

Rashford’s letter is not the first time the footballer-turned-campaigner has intervened to provide decent food for children.

Last year he forced the government into a U-turn over free school meals so that they were provided to vulnerable children during the summer and Christmas holidays.

In May he became the youngest person to top the Sunday Times giving list by raising £20 million in donations from supermarkets to tackle child food poverty.

Rashford, who has spoken movingly about his own experience growing up in poverty, said the stigma attached to receiving help from the state was  “the most silly thing I’ve ever heard”.

In a letter to MPs last year urging them to back the child food poverty taskforce, Rashford recalled hearing his mum cry herself to sleep as she worried about how to make ends meet.

“I remember the sound of my mum crying herself to sleep to this day, having worked a 14-hour shift, unsure how she was going to make ends meet,” he wrote at the time.

“That was my reality and thankfully I had the talent to kick a ball around to pull us all out of that situation.

“Many can’t find that way out and aren’t being offered a helping hand to do so.”

The department for health and social care has been contacted for comment.